During their Tuesday evening newscasts, CBS and NBC squeezed in a few moments each to promote the newest health-related regulation set to affect Americans under ObamaCare next year in the form of additional requirements regarding the listing of calories for food and drinks at public eating establishments, vending machines, and movie theaters.

Both networks pointed out that the move was announced and will be overseen by the Food and Drug Administration (FDA), but failed to present any opposition to these changes with NBC neglecting to even mention that the regulations derived from the President’s health care law. [MP3 audio here; Video below]

The CBS Evening News with Scott Pelley aired a full report from CBS News chief medical correspondent Dr. Jon LaPook that portrayed it as being great news for consumers as it closely will follow a similar order went into effect in New York City in 2006.

Anchor Scott Pelley told viewers at the onset of LaPook’s report that: “It's part of the President's health care law, figuring that you might be healthier if you know what you're eating.”

LaPook noted how “the new rules require calorie information on menus and menu boards at chain restaurants or any food establishment with 20 or more locations” with this being required of not just restaurants “but vending machines, amusement parks and movie theaters.” In addition, any alcoholic beverages at such venues must also have the calorie contents listed on the menus.

NBC’s Brian Williams played up the new FDA regulations during NBC Nightly News as “sweeping changes” for “[a]ll kinds of places where we eat what we're not supposed to.” The liberal anchor then parroted the argument of those in favor of the changes: “They're hoping people eat healthier and menus and selections get healthier as well over time.”

While CBS and NBC declined to do their homework in mentioning an opposition, an article from Tuesday’s Wall Street Journal did and presented arguments and quotes from those both for and against the expansion of posting calorie counts.

When it came to mentioning those against the changes, the Journal article cited the Food Marketing Institute as estimating that the requirements will cost over $1 billion in the first year “with continuing costs reaching hundreds of millions of dollars.”

Additionally, the Journal mentioned an statistic from the National Restaurant Association (which is in support of the requirements) that over 200,000 restaurants nationwide will have to follow these new labeling guidelines.

The full transcript of the tease and segment that aired on the CBS Evening News with Scott Pelley on November 25 can be found below. 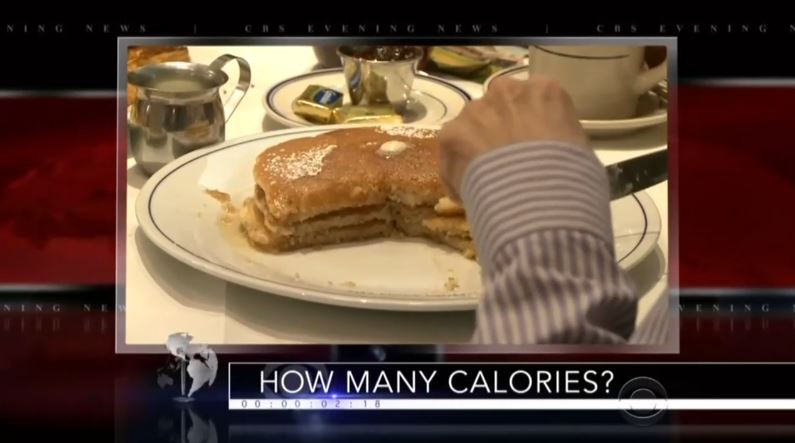 [ON-SCREEN HEADLINE CAPTION: How Many Calories?]

SCOTT PELLEY: If you knew how many calorie calories were in those pancakes, would you order them? The government's big bet, when we come back.

PELLEY: You're about to learn things you never knew or never wanted to know about popcorn, pizza, and most everything else you eat. The FDA announced today new rules that will require posted calorie counts on menus. It's part of the President's health care law, figuring that you might be healthier if you know what you're eating. Here's Dr. Jon Lapook. 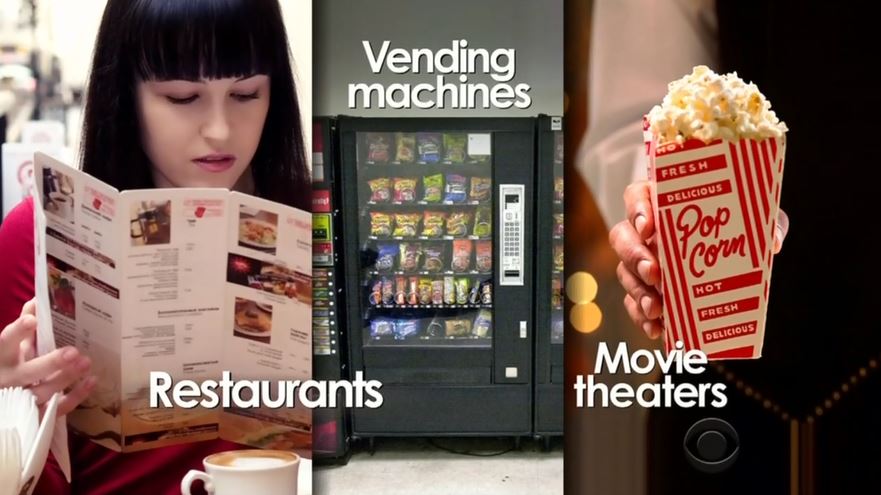 DR. JON LAPOOK: The new rules require calorie information on menus and menu boards at chain restaurants or any food establishment with 20 or more locations. This applies not only to restaurants but vending machines, amusement parks and movie theaters. The calorie content of alcoholic beverages must also be listed if those drinks appear on the menu. FDA Commissioner Dr. Margaret Hamburg.

FDA COMMISSIONER DR. MARGARET HAMBURG: When you go to a restaurant, you really have no idea what's in the food that you're consuming, and with Americans eating about a third of their calories outside of the home, that's a big gap in information, and information that can matter for health.

LAPOOK: New York City enacted a similar measure in 2006. One study found about 15 percent of patrons at fast food restaurants reported using the calorie information and they bought food with an average of 106 fewer calories. Dr. Walter Willett at the Harvard School of Public Health says the rule could be an eye opener. 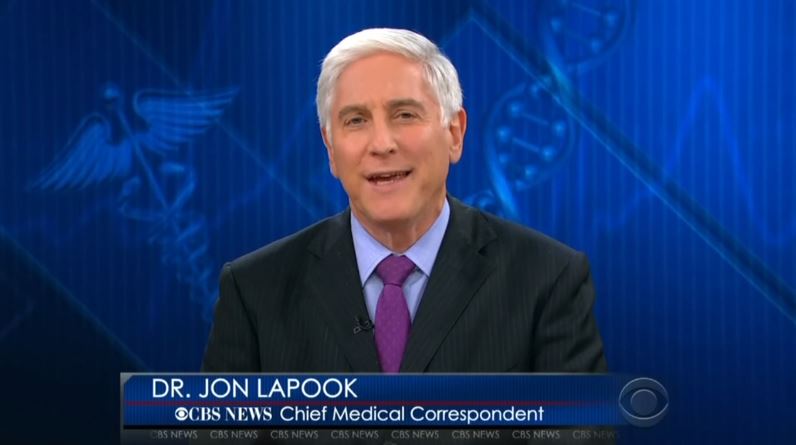 HARVARD SCHOOL OF PUBLIC HEALTH’S DR. WALTER WILLETT: Sometimes that cup of coffee, it has a huge number of calories coming from it because it's been loaded up with sugar and cream or salad that looks perfectly healthy could be 1,000 calories or eve more.

LAPOOK: 106 calories may not seem a lot, but if you save that amount every day it could translate into a 10-pound weight loss in a single year.

PELLEY: And these new rules are due to take effect in about a year. Jon, thank you very much.

The relevant portions of the transcript from November 25's NBC Nightly News are transcribed below. 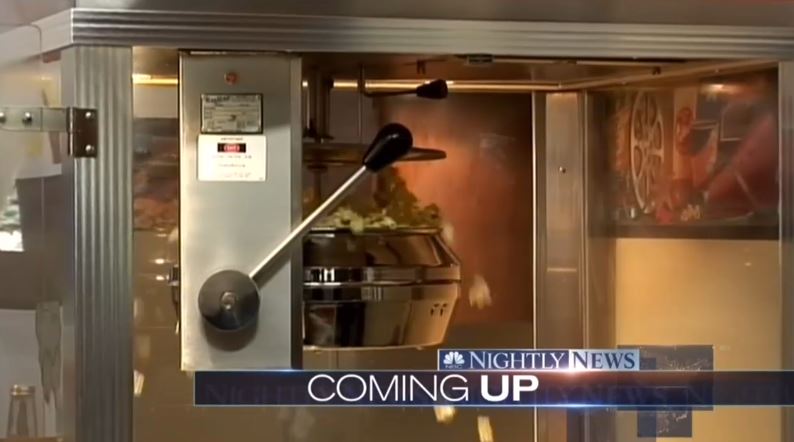 BRIAN WILLIAMS: Also, some of the day's other news, including sweeping changes from the Feds coming soon to a theater near you. 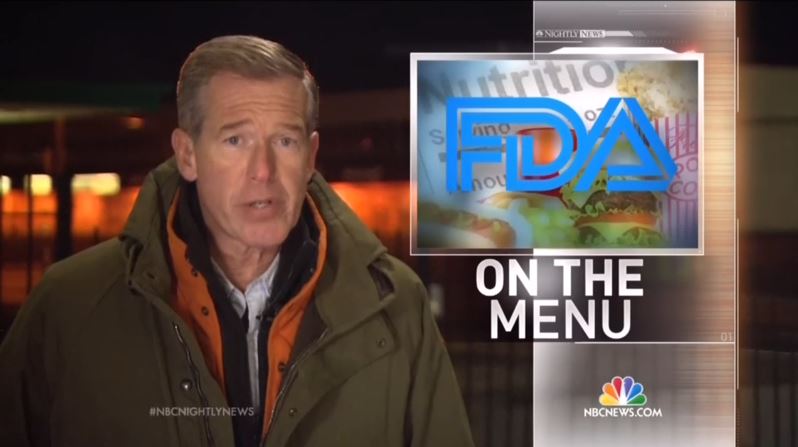 WILLIAMS: The Food and Drug Administration today announced sweeping changes coming soon to chain restaurants, movie theaters, amusement parks, coffee shops and vending machines all across our country. All kinds of places where we eat what we're not supposed to. There are now going to be calorie counts visible before you order. Some cities already have these rules in place, but this is the Feds. Now they're going nationwide. They're hoping people eat healthier and menus and selections get healthier as well over time.