On Wednesday night, ABC News continued to promote a new book with the “astonishing” claim that Jesus Christ married Mary Magdalene and had two children together with a flattering one-and-a-half minute segment on ABC’s World News Tonight with David Muir.

Anchor David Muir began by stating that it “has sparked a fiery debate among the faithful” while ABC News chief foreign correspondent Terry Moran characterized the book’s central premise as an “astonishing and, to many, blasphemous claim” that “Jesus married Mary Magdalene and had two sons with her, is history.” [MP3 audio here; Video below]

Moran and Muir even likened it to something straight out of the book The Da Vinci Code and included clips from its film version with the exception being “[t]hat was fiction.”

Only near the segment’s conclusion did Moran include a soundbite from Duke University’s Mark Goodacre, who said that there is “simply no evidence in this text or anywhere else” to support the book’s claim.

Following that, Moran ended with this dig at Jesus Christ and Christianity: “One thing's for sure: After 2,000 years, the power of Jesus to inspire great faith and great controversy abides.”

Additionally, ABC hasn’t been the only American network to promote this book and its claims. On Tuesday night, the Spanish-language broadcaster Univision offered a favorable story on the book during its evening news program, Noticiero Univision.

As noted at the beginning of this story, this was not the first time this week that ABC promoted this book or anti-Christian sentiments. As the Media Research Center’s Scott Whitlock noted, ABC ran reports making assertions about Christianity in 2007, 2010, and on Monday’s Good Morning America, when it included a similar story to Moran’s that was filed by ABC’s Dan Harris.

The complete transcript of the segment that aired on ABC’s World News Tonight with David Muir on November 12 can be found below. 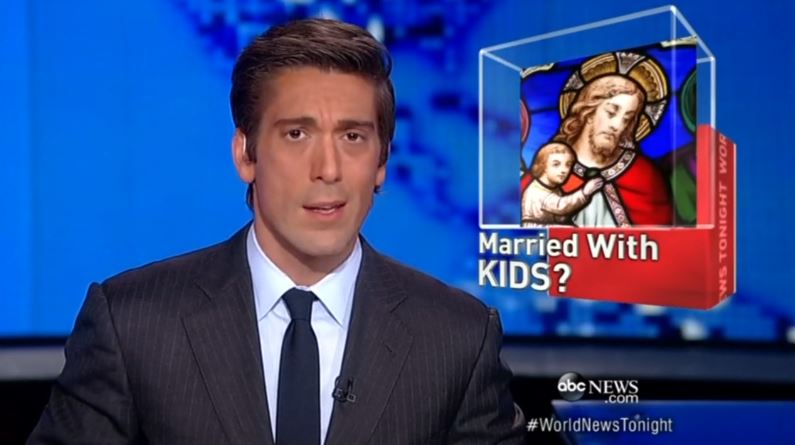 DAVID MUIR: And tonight, a headline that has sparked a fiery debate among the faithful. A new book with a provocative theory straight out of The Da Vinci Code. Was Jesus married with children? ABC's chief foreign correspondent Terry Moran tonight with the authors and the lost gospel they say proves their claim.

TERRY MORDAN: Did Jesus have a wife and two kids? That is the astonishing and, to many, blasphemous claim in the new book, The Lost Gospel.

SOPHIE NEVEU [CHARACTER FROM THE DA VINCI CODE FILM]: Who is she?

MORAN: A claim just like the one in The Da Vinci Code.

MORAN: That was fiction. This morning in London, the authors of this new book claim their version, that Jesus married Mary Magdalene and had two sons with her, is history. Hidden History. There's a secret code, they say, buried in the ancient words of a 1,500-year-old manuscript and they say in their book and an upcoming documentary, they've cracked that code.

THE LOST GOSPEL CO-AUTHOR SIMCHA JACOBOVICI: What’s the code? Not only is he married, but it celebrates his sexuality.

MORAN: Many scholars are skeptical. For instance, the name Jesus never actually appears in that ancient text. 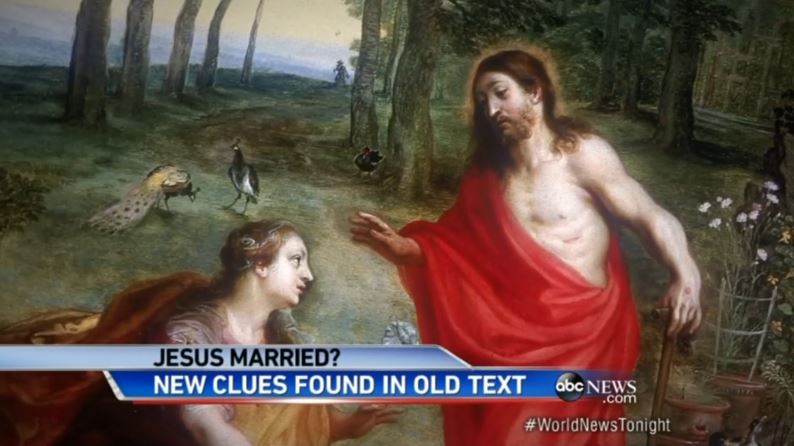 DUKE UNIVERSITY PROFESSOR MARK GOODACRE: There is simply no evidence in this text or anywhere else that Jesus was married to Mary Magdalene, much less that they had a couple of children.

MORAN: One thing's for sure: After 2,000 years, the power of Jesus to inspire great faith and great controversy abides. Terry Moran, ABC News, London.