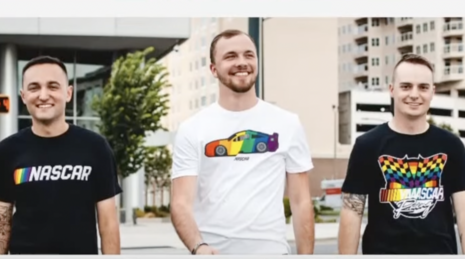 NASCAR has joined in the race to become the most woke sport, and their latest stunt on Twitter is emblematic of their mission to alienate all their fans in pursuit of forcing the LGBT cause down all our throats, the Post Millenial reported.

NASCAR has increased its efforts in pushing liberal causes after it received flak for committing the grave sin of allowing Texas Gov. Greg Abbott (R) to wave the green flag at a race at Texas Motor Speedway on May 22. The organization said “recent actions have not aligned with NASCAR’s mission to be a welcoming sport for all,” alluding to Abbott.

In addition to their virtue signal about Pride month on June 1, they now have a new line of gay shirts for all the progressive NASCAR fans to enjoy, however many of those even exist.

After all, NASCAR fans started the now-infamous “let’s go Brandon” chant. I would wager that the same people that would enjoy wearing a gay flag on their chest wouldn’t be the same people enjoying carrying out the previously mentioned chant.

Also according to The Post Millennial, NASCAR also has partnered with the Carolinas LGBT Chamber of Commerce, pushing for “equitable change within the workplace and marketplace.”

“The intentionality of their partnership will allow the Carolinas LGBT+ Chamber to leverage relationships and increase our work in the area of diversity, equity, and inclusion,” Tiffany Keaton, vice-chair of the Chamber of Commerce, said.

We all know what this is code for: NASCAR will push the LGBT agenda onto you and your sport, and you will like it. NASCAR seems committed to alienating all its fans in service of the liberal cause. Pandering to gay and trans people certainly isn’t going to return them to their glory days, as other motorsports begin to eclipse their falling viewership.

NASCAR is going woke, and it remains to be seen if they will go broke as a result.