The Arizona DoE’s website links to adult-moderated chat rooms Q chat space and Gender Spectrum, which do not verify age. Initially published by Libs of TikTok on Twitter, the websites contain chat rooms for children as young as 13 on Q chat space. Q chat space also has a “quick escape” feature to hide the content from a child’s parents. Gender Spectrum allows 10-year-olds to access their website, and is partnered with the Biden foundation as a “key partner” according to The Daily Wire. 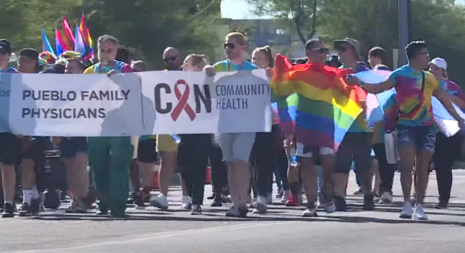 The left gets incensed when conservatives use the word “grooming” to describe their enthusiastic efforts to get kids talking about sex and gender. Yet here is the Arizona Department of Education using its resources to indoctrinate children into leftist orthodoxy. The government in Arizona seems to think it’s okay for the government to subvert parents and “educate” their children on gender theory and sexuality.

As The Daily Wire said, ADE superintendent Kathy Hoffman is making good on her campaign promise to sing the praises of LGBT ideology to your children. She opposed two bills in the Arizona legislature to prohibit gender reassignment surgery for minors. Hoffman is not interested in educating your children, she wants to make them question their gender and be able to get cut up in a hospital to “change” it.

However the buck doesn’t seem to stop with Hoffman, as these chatrooms have big name backing from powerful people and organizations. Q chat space is a product of Planned Parenthood, the LGBT network PFLAG, and LGBT community center organization CenterLink, according to The Daily Wire’s findings. Gender Spectrum is partnered with Pearson, one of the titans of education materials. The liberal elite of this nation are committed to pushing LGBT issues onto children through their NGOs, parental consent be damned.

The increasing push for LGBT ideology onto children is the most troubling development in this country in the last decade. The education system is once again showing its power to circumvent parents and turn their children into drones for the left. They do not care for the child’s well-being, they only care that their ideology is the children’s creed by the time they leave.