In honor of Pride Month, NBC News is pulling out all the stops to further the poisonous, unnatural, ungodly order of business that is the transgender rights movement. This is no longer about tolerance or equality, as they would have you believe. It is about indoctrination and submission, inevitably resulting in the complete destruction of the sacred family unit and moral order. 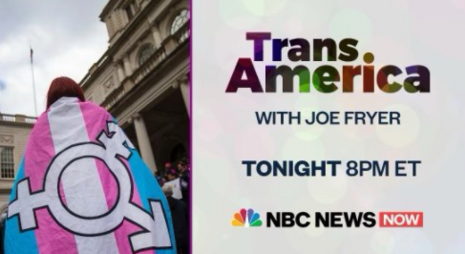 “TransAmerica with Joe Fryer” on NBC News Now was the latest propaganda piece from the LGBTQ cabal. With professionalism and poise, Fryer, who is gay himself, maneuvered through the mire of transgender history, struggles, the community’s current concerns, and the future of the cause. The media overlords laid it on thick, my friends.

This latest transgender devotional was sure to tug on your heartstrings while convincing you that transgender individuals in America are the most oppressed, discriminated against, marginalized population within the “land of the free.” All facets of the transgender agenda were covered. "Anti-trans" legislation is excoriated by LGBTQ advocates. Stricken transgender children were interviewed by Fryer, along with their concerned, compassionate parents. An “In Memoriam” segment dedicated to transgender murder victims was provided as well. Respectfully, it is a touching tribute and one that all can sympathize with. It was also especially helpful in evoking outrage and concern for transgenders, as well as inspiring guilt in those who may not agree with the sexual degeneracy deeply tied with such an identity.

Save yourself your precious time, preserve your diminishing mental stability and maintain any optimism for the future of the nation by not watching this NBC special. The special’s focus was on “reasons for hope and concern for those who are transgender.” If the horrific visages of types like the current Assistant Health Secretary Rachel Levine offend thee, avert your eyes. In fact, the piece began with a spotlight on Levine, so it wa a good stopping point.

After first showcasing prominent transgender celebrities and politicians, such as Laverne Cox and Elliot Page and magnanimously including California Republican gubernatorial candidate Caitlyn Jenner, Fryer dove into the challenges presented by GOP lawmakers to trans rights. Florida Governor Ron DeSantis (R), who signed the “Fairness in Women’s Sports Act” - legislation which protects girls’ sports - on the first day of Pride month, was depicted as public enemy #1. They aren’t pleased with you, Ron! Watch your back.

The main purpose of the piece was to portray current transgender legislation being adopted by many states as “hate crime legislation.” The framing of the piece was inherently biased, as it portrayed the trans effort as a matter of human rights, as though this was the latest civil rights frontier not yet reconciled. The phrase, “the glass ceiling is not yet shattered, but cracked” was a common motif. This sentiment revealed that the LGBTQ cabal understands their devilish aspirations are not yet fulfilled, not until the sexual identity of transgenderism in both adults and children has become completely normalized as unquestionable reality.

My friends, they were fighting hard to get to the children. One particularly disturbing instance from the special comes from a panel discussion in which a certain trans advocate described trans sports bans as “making a problem out of no problem,” and concern over fairness, “that transgender girls have an unfair advantage,” was discredited as laughable.

Another panel member, state Senator Sarah McBride of Delaware, saw the rush to implement trans bans in sports as politicians realizing that “the clock is ticking on their bigotry” and that “this is essentially the last opportunity for them to push forward anti-trans policies and they’re targeting trans youth.” This senator, a trans woman, also said that the impetus of legislators was “to make life so difficult for these trans youth that they never grow up to be trans adults.” Since “about 80 percent of kids with gender dysphoria” grow out of it, maybe it's the trans-activists who want to make it difficult for confused children to NOT to grow up to be trans adults.

The aim of proposed legislation to protect children from trans brainwashing was portrayed by the special as both “ban[ning] gender-affirming medical treatment” and “stopping trans youth from playing on teams that match their identity.” Yes, in fact, that is exactly what reasonable Americans and lawmakers are seeking to do, recognize biological reality.

Each state which is considering so-called "gender-affirming" healthcare for trans youth is listed as well as those who have considered “single-sex facility restrictions,” that is, maintaining the integrity of male and female restrooms and locker rooms. Those states which have considered bans on trans youth from sports are also highlighted.

Now that the "anti-trans" states are outlined for the American public, the special includes a completely ludicrous segment of misinformation on medical intervention on vulnerable children being “life-saving.” “Denying it will result in death for patients” and “the passing of these bills will harm trans lives,” says trans woman Dallas Ducar, founder and CEO of Transhealth Northampton, pouring on the emotional blackmail.

There are innumerous other outrages within the "TransAmerica" piece. As Pride Month approaches its end, so too should our passive response to this societal cancer.