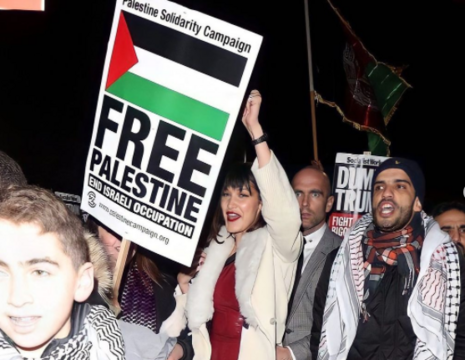 Bella Hadid’s activism in defense of Hamas-run Palestine is now entangling her with radical hate-crime perpetrators.

The American-Palestinian model posted a picture of herself sitting on a car along with other Pro-Palestine protestors at an rally in Brooklyn on May 16 to her 43 million Instagram followers.

Within the photo, which received over 4.5 million likes and has since been deleted, appears a man by the name of Waseem Awawdeh, 23, who four days later, was arrested for participating in the brutal mob beating of an innocent Jewish man in Times Square.

Daily Mail reported on the controversy, noting that Awawdeh “is charged with assault as a hate crime, gang assault, menacing, aggravated harassment as a hate crime and criminal possession of a weapon.”

The victim was Joseph Borgen, a 29 year-old accountant on his way to a pro-Israel rally in Times Square when a group of eight to ten people accosted him out of no where. He shared with Daily Mail that feared for his life, that the raging mob hurled slurs along with their fists, “You filthy Jew. We’re going to f*****g kill you. Go back to Israel. Hamas is going to kill you.” Awawdeh was arrested after the fact, and the police are pursuing the remaining suspects.

Hadid publicized her presence at the same rally Awawdeh attended, gushing “the way my heart feels.. To be around this many beautiful, smart, respectful, loving, kind and generous Palestinians all in one place…it feels whole! We are a rare breed!!” She added “It’s free Palestine til Palestine is free!!!” The model may have jumped the gun on this. The following anti Semitic attack by one of her fellow “smart, respectful, loving, kind and generous Palestinians is not a good look. In fact, Hadid has come under fire for her pro-Palestine activism. Associating with violent criminals for the sake of “social justice” is not an effective tactic.

Her massive platform as a preeminent culture figure does not go unnoticed. The official Twitter of the State of Israel, tweeted at Hadid after her protest photo-op: 'When celebrities like @BellaHadid advocate for throwing Jews into the sea, they are advocating for the elimination of the Jewish State. 'This shouldn't be an Israeli-Palestinian issue this should be a human issue,' the Israeli ministry account wrote. 'Shame on you.'

Israeli politician Yamina MK Ayelet Shaked also called Bella Hadid out by name. The former Minister of Justice for Israel shared a fiery Instagram post in which she stated, "‏Bella, you should be ashamed for sharing the completely false and deeply offensive lie that I ever called for ‘genocide.’" "It’s this kind of baseless demonization that is encouraging anti Semitic violence. Unlike Hamas and its supporters, we target terrorists and protect civilians."

StopAntisemitism.org called for a brand boycott of the model:

.@bellahadid you can delete/archive all the photos you want of your affiliation with Palestinian men that assault Jews in NYC but the internet is forever. https://t.co/VtPUavPCUQ pic.twitter.com/SlVkOqAuJq

One would think this negative press would cause Hadid pause. That is not the case, however. Even after calls for having fashion labels cut ties with the model, Hadid persists with spreading anti-Israel propaganda. Just yesterday, she shared a graphic to her Instagram calling Israel an “Apartheid State,” referencing a report from Human Rights Watch accusing Israel of the "crimes against humanity of apartheid and persecution." She is now calling on her followers to participate and to those who don’t, she remarked: “To my friends and colleagues... I see you not standing up for the oppressed and I’m taking notes.”

Charming. Hopefully she doesn’t send a group of her “beautiful, smart, respectful, loving, kind, and generous” friends after you.