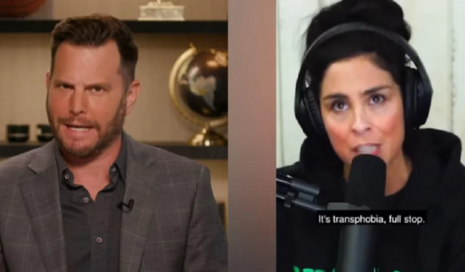 The Blaze TV host featured a viral clip from Silverman’s podcast in which she engaged in a vile diatribe against CA gubernatorial candidate Jenner. Silverman accused the former Olympian and trans woman of being transphobic after backing transgender male athlete bans in women’s sports.

At the end of her unhinged ranting, the stand-up comedian slandered Jenner by calling her a “t--t.” Rubin called out Silverman’s hypocrisy during his own podcast “The Rubin Report” saying, “it's you, Sarah Silverman, who is transphobic because you have an irrational fear of trans people who think for themselves.”

Rubin initially flamed Silverman’s grating tone, “How does anyone watch that? It’s such an unpleasant way of speaking.” A compelling question, indeed. He then responded to her scientifically inaccurate denial of there being any biological difference between male and female athletes. Silverman claimed any such differences are a matter of superficial, accidental physical trademarks, which can easily be remedied by pairing boys and girls together on teams based on weight and height.

Rubin called this trash take “crazy” and refuted it by referencing biological characteristics such as muscle and bone density that differentiate athletic capabilities between the sexes. Rubin also mentioned that Silverman’s argument ignores the fact that different sports, such as basketball, require a mix of different body types, so pairing players strictly based on equal weight and height is not practical.

Continuing to be delusional, Silverman equated Jenner’s acknowledgement of male and female differences with being transphobic, which, as Rubin clarified, means “that you have an irrational fear of trans people.” Incredulous of her logic, Rubin exclaimed, “Men and women are different. The idea that saying that makes you transphobic!” Rubin pressed, “All Caitlyn wants, and all most sane people want, is to not have biological boys competing with biological girls in sports…saying that makes you transphobic?”

“It seems to me that Sarah Silverman is transphobic,” he fired back. “She has an irrational fear of these people because when Caitlyn Jenner comes out and says what she believes you think you can say all the worst things about her.” Rubin added that unlike Silverman, he believes that trans people can believe whatever they want and this capacity does not make them immediately irredeemable.

“When Caitlyn Jenner first came out as trans four years ago, she was a hero to all of these people. But then she committed the cardinal sin of woke-ism. She dared start saying what she actually believes, and now she is the enemy. So, it is you, Sarah Silverman, who is transphobic because you have an irrational fear of trans people who think for themselves. Guess what, Sarah Silverman. Not all trans people have to think the way you think they should think. Thus, you are the bigot in this case."

The rest of intelligent society is likely to agree.