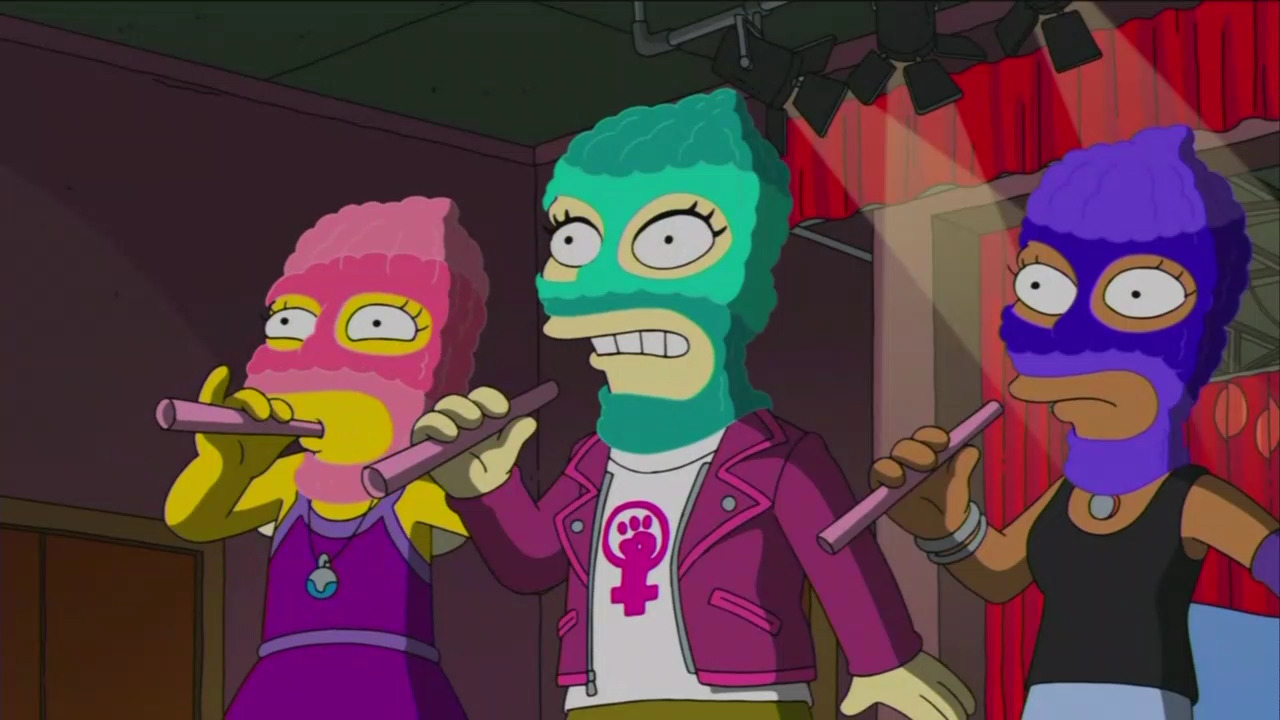 The episode centers around news that "The Itchy & Scratchy Show," a cartoon about a violent mouse and cat featured on ‎"The Krusty the Clown Show," would be making its two characters female to improve “gender diversity.” This sparked outrage from the boys while the girls rejoiced. However, as the episode progresses, the show’s jabs are primarily at the left.

After being disowned by his friends for enjoying the new female version of “The Itchy & Scratchy Show,” Bart befriends a group of sixth grade girls, who call themselves “Bossy Riot,” a reference to the feminist punk rock group “Pussy Riot.”

Feminism is not shown in a positive light with the girls complaining that the school history books have the word “his” in them--before tossing the book into a blender. It was a reference to feminists using the term “herstory” instead, as many of them believe history is written from a man’s point of view and is therefore problematic.

As Bossy Riot wreaks havoc on the town of Springfield with graffiti and dropping pink paint on unsuspecting people, their group gains notoriety--and ends up on the news. Although they are doing bad and illegal things, Lisa is a fan of theirs because she agrees with their feminist message.

Kent Brockman: Springfield, a town living in fear, as masked pranksters calling themselves "Bossy Riot," spread their terrifying message of female empowerment. The latest victim of this "Gal Qaeda," our once-proud symbol of the portly pastry-purveying patriarchy.

Homer: "Lard Lady"? But a donut is the ultimate symbol of masculinity.

Kent Brockman: The only lead police have as to the identity of Bossy Riot is this security camera footage.

Homer: (Laughs). Moe and his bats.

Lisa: Bossy Riot is so cool. We need fearless female activists to fight back against misogyny and man-spreading.

Of course, manspreading is when men sit with their legs far apart in a public space--taking up a lot of room. It’s a common complaint among feminists, however, the show used it as a punchline to imply feminists are not worries about serious issues.

Plus, Lisa’s fawning over Bossy Riot despite their illegal activity mirrors the left’s infatuation with Antifa, the masked and militant anarcho-communist group who attacks anyone with whom they disagree--not simply fascists, as their name implies. Despite the destruction and damage Antifa has done, the left media has largely given them a pass, like CNN’s Don Lemon, MSNBC’s Jason Johnson, and many others.

Towards the end of the episode, Bossy Riot decides they want revenge on “The Krusty The Clown Show” for its decision to go back to having the male Itchy & Scratchy characters in future episodes. They decide in response they will destroy the archives of all of the old episodes which featured the male characters. However, Bart opposes the idea and when he is trying to explain why it is a bad idea, Lisa yells to him, “Stop mansplaining!” -- another favorite buzzword among feminists. It implies that men over explain things to women and do so in a condescending manner. Lisa ultimately ends up saving the tapes from destruction.

Given some of the show’s talking points in recent times about racism and going after President Donald Trump, the direction of this episode was certainly unexpected. However, it is certainly welcome, so hopefully the show continues on this track rather than spewing the same liberal talking points as most others in the entertainment industry.