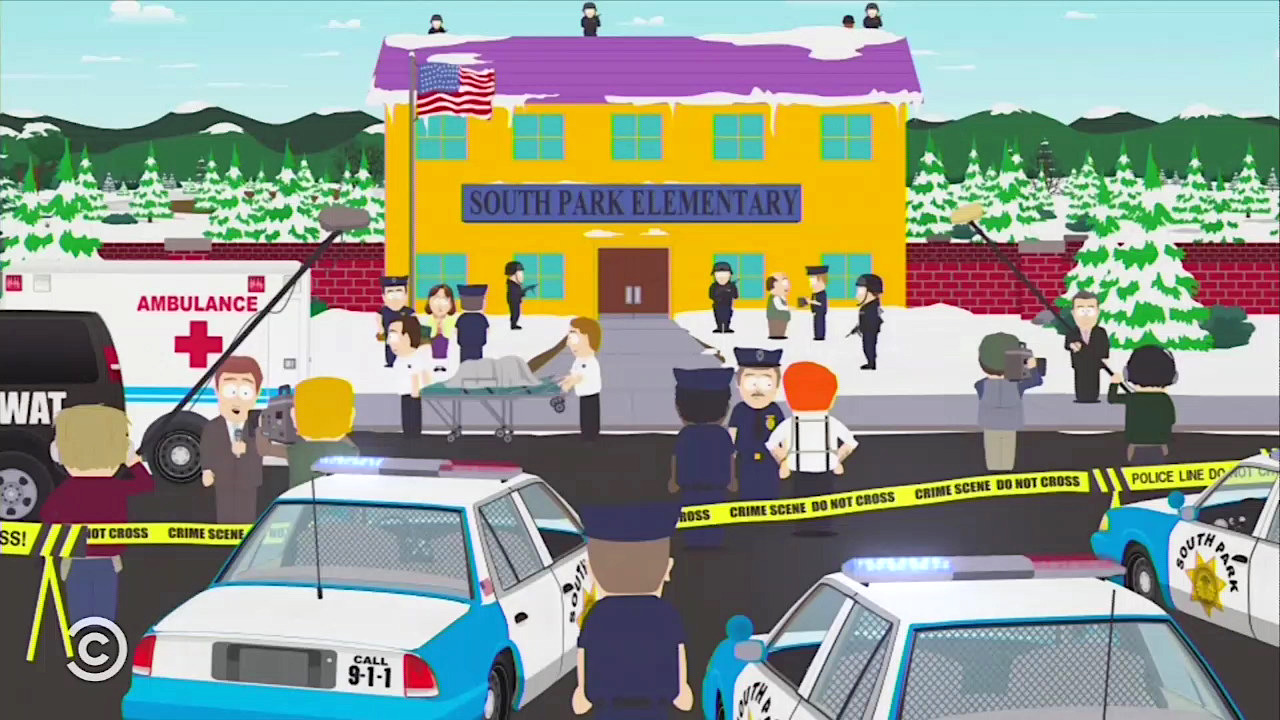 South Park once again opened up their latest season by intentionally embroiling themselves in controversy over a touchy subject. Forget about depicting the Prophet Mohammed, the Comedy Central show's 22nd season began on Wednesday with 5 school shootings, all met with little reaction from the townsfolk.

It’s a clear attempt to satirize the "normalcy" of mass shootings that have occurred in the United States in recent years. However, when it comes to families losing their children, it’s difficult to find any humor in such a sad topic. Naming the episode "Dead Kids" is dark humor at its darkest.

The show starts out in a South Park Elementary School math class after many students struggled on a test. While their teacher is trying to explain how to add fractions, gunshots and screams can suddenly be heard, but no one in the class even reacts; they go about their business as normal. Ultimately, the running "joke" throughout the episode is that school shootings have become so common of an occurrence in the United States that people have become apathetic.

Once the boys get out of school, Stan’s mom, Sharon, rushes over and hugs him because she was worried about him during the shooting. However, both he and his friends find this to be an odd overreaction--as does Stan’s dad, Randy, at dinnertime later in the day.

Sharon urges Stan to tell Randy "about what happened at school today" at dinner and Stan talks about flunking his math quiz, the school shooting apparently so insignificant as to be forgotten or not worth mentioning. Randy finally hears about the shooting but, after confirming that Stan was neither shot nor was the shooter, has zero interest and goes back to asking about the math test. This upsets Sharon again, who yells, “Kids died at his school! Why are you all acting like this is normal!?” before storming upstairs. She is treated as an oddity, the only person in town concerned about the shootings, and Randy dismisses it as PMS.

-Sharon: Stanley, well, do you want to tell your father about what happened at school today?

-Sharon: No! The other thing!

-Randy: What other thing? What happened at school today?

-Stan: Oh yeah, some kid shot up the school.

-Randy: Who shot up the school? Was it you?

-Randy: Did you get shot?

-Randy: Oh. Well what’s this about failing a math quiz?

-Sharon: Are you serious?! Did you not hear what your child said?! Kids died at his school!

-Sharon: Why are you all acting like this is normal? What is wrong with you people?

-Sharon: No, I'm not okay! Children were shot! They were killed at a school where they were supposed to be safe!

-Sharon: Why does there need to be anything else?! Are you kidding me?!

-Sharon: Why isn't anyone else emotional?!

-Randy: When was your last... I mean, you know how sometimes things can seem like a little bigger deal 'cause, you know, your...down there? 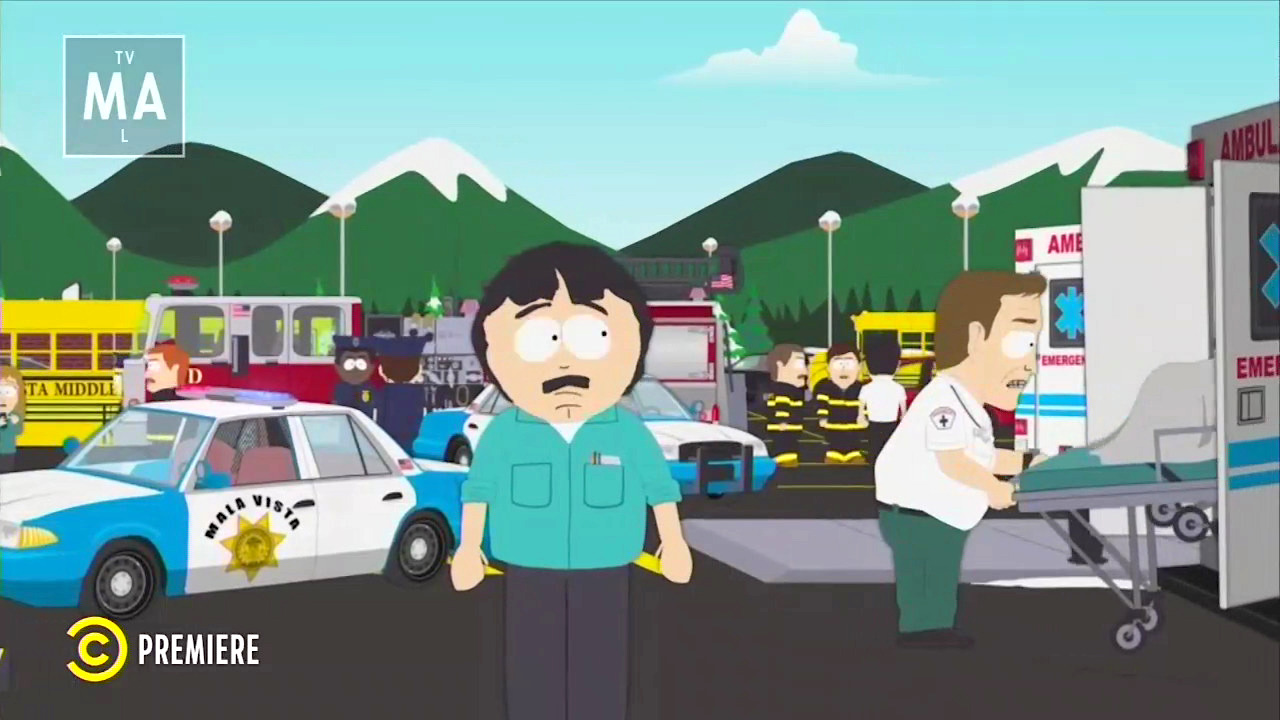 The gun debate is never brought up nor any other kind of discussion of root causes; the two sides presented are people who care about children dying vs. people who act like it's no big deal. What message are we supposed to take from that? In the real world, everyone thinks school shootings are a big deal and cares about kids dying, it's the causes and how to prevent more that we disagree on.

The next day there is another shooting at South Park Elementary and again it is ignored by everyone. Sharon is the one person showing normal emotions over the shootings while the rest of the town is complacent so Randy and his friends conclude that his wife must be going through menopause. Randy is then seen outside of a middle school asking a medic about menopause, all while the man is loading a body into an ambulance in response to a third shooting.

A fourth shooting occurs back at South Park Elementary while all the parents are there to try to help Randy cheer up Sharon. Of course, this still doesn't faze them and Sharon is said to bring "so much negativity."

By the end, however, Sharon’s opinion has changed. To Randy's shock and joy she apologizes for overreacting and admits her emotions may be hormonal. Then they find out that Stan has been shot in a 5th shooting. Sharon’s response is to shrug and say with a smile, “It’s not the end of the world.” Randy laughs, tells her he loves her and they embrace--and then the episode ends.

It’s a prime example of the show taking its parody to the extreme but at the same time, joking about children being shot is over-the-top--even by South Park’s standards. Furthermore, the show’s creators, Trey Parker and Matt Stone, who have said in the past that they are both pro-gun and have actually shown some of the benefits of guns, never offer up any kind of solution to the horror. Reveling in the anticipated controversy by promoting the hashtag “#CancelSouthPark” in the run up to the premiere, during commercial breaks, and even in the final credits for a show about "Dead Kids" is cynical, to say the least.

South Park’s humor for the past two-plus decades has been daring, their aim to play the provocateur. Sometimes that means they’ll hit important topics with great insight, at other times it means being flat out (and unnecessarily) crass. This time it was the latter.