This is the story of an all-out gay pedo-ring. This is another case of child sex trafficking happening in our country and not many people even cared. 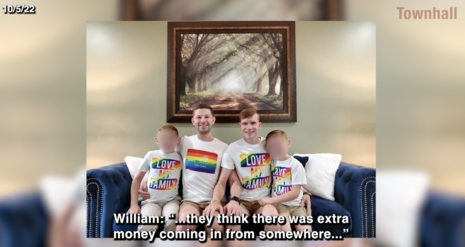 During the summer of 2022, a gay couple in Georgia was arrested for the sexual abuse and exploitation of their two adopted sons. The story made national news but hasn't appeared to have had a follow-up from any main outlets, excluding Townhall, who just released parts one and two of a four-part investigative series following a month-long investigation on the case.

The children, now ages nine and 11, were forced to make “homemade” child pornography by their LGBTQ adopted fathers, William and Zachary Zulock. These parents not only groomed their sons but legitimately assaulted and exploited them.

Here’s what Townhall reported about the specifics of the abuse (WARNING: GRAPHIC CONTENT)

During the arrests it was revealed that two other men in the area, Hunter Lawless and Luis Armando Vizcarro-Sanchez, were solicited by the fathers “to perform an act of prostitution on one or both of the children.” Supposedly they received messages on social media from Zachary Zulock about “f**king [his] son” as well as to “stand by” for images and videos of himself sexually abusing the child.

Though the parents face nine different life sentences, the Department of Justice (DOJ) has done nothing major about the case. Townhall inquired if the DOJ would investigate the Zulock case co-defendants, two of the men from social media who were told about Zachary going to “f**k” his son.

The U.S. Attorney’s Office for the Northern District of Georgia said, “We decline to comment.”

The parents have been indicted by a grand jury for incest, sodomy, child molestation, sexual exploitation and prostitution of minors.

While in jail one father worried about their subscriptions that were auto deducting from their bank accounts more than their children. A family member claimed that “the boys were just another commodity to them,” and it was revealed that the state of Georgia was still paying child support for the boys until they turned 18.

Of course, nobody wants to investigate the story because it looks horrible for the LGBTQ community.

Regardless of sexual preference or affiliation, the bigger issue here is that there's an overwhelmingly lacking amount of care for the lives of children. They’re treated as pawns in this machine of a world we live in, disposed of like trash for mere convenience and indoctrinated into progressive ideologies because to the left, and much of their world, a child's innocence doesn't matter.

I really hate to say that we told you so, but conservatives have been warning about this type of behavior and trying to expose it for a long time. It's unfortunate that a crazy case like this has to happen for people to even consider the fact that we aren't making it up. Kids are the target of most of the wackos in the world today.

At the moment Townhall has released parts one and two of its investigative study, but more are expected this week. The bottom line is that children’s lives were ruined and abused and the left, due to their anti-life, anti-child and pro-groomer behavior -- with the help of the media and our administration -- don’t seem to care a bit.