Sometimes I wonder how many mental institutions have released their patients prematurely. 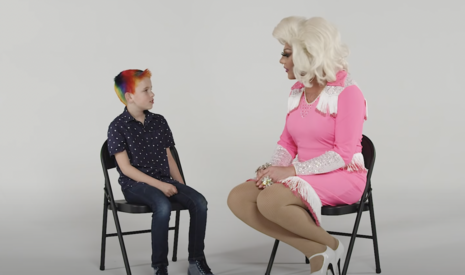 NBC News Reporter Brandy Zadrozny, joined MSNBC to speak about violence against LGBTQ people following the shooting at a gay bar in Colorado. Zadrozny claimed that "far-right conservatives" are the biggest threat to people like this ... and to children.

I keep forgetting that if you don’t kiss the floor that the gays and their tribe walk on, then you’re a bigot.

Zadrozny explained how conservatives have shifted from bashing Critical Race Theory to a new focus: LGBTQ people in a clipped video shared by Tom Elliott on Twitter.

NBC's @BrandyZadrozny: "Drag Time Story Hour ... was ubiquitous in libraries all over the country — a drag queen would come, read a story, it was fun; the kids loved it, & then some sort of friendly friendly shows on a Sunday ... you bring the kids" pic.twitter.com/hoxyLdCafl

Something happened in March and April of this year. And in March and April of this year, the far right-wing conservatives sort of got over CRT or Critical Race theory, they needed a new boogyman and they leapt on LGBTQ community members, specifically trans people, their doctors, their caregivers, libraries that had books that were LGBT focused, this was really just sort of the cause celebre' on the right.

In truth, LGBTQ folk have no longer just decided to be gay for themselves and leave it at that. In recent years the left has been going after our kids to get them to be a part of their alphabet mafia and THAT’s why conservatives step in. THAT’s why conservatives are fighting like hell to protect the innocence that children should have. That goes for Critical Race Theory AND whatever else the progressive mob plans to indoctrinate kids with.

Zadrozny claimed that LGBT folk are “getting killed” and experiencing “real world violence” from people who oppose their rhetoric. Violence of any kind is deplorable and we extend our prayers for those affected by the shooting in Colorado Springs. But the LGBT agenda isn't innocent. They’re professional victims who think it's in their interest to subvert normality. Getting at kids is a huge part of their strategy.

In the clip Zadrozny also brought up how wonderful Drag Queen Story Hours are for kids to attend.

They targeted drag shows a lot, in part because Drag Time Story Hour, where a drag would come — it was uh — ubiquitous in libraries, all over the country had it. The drag queen would come read a story, it was fun, the kids loved it, and then also some sort of “family friendly” drag shows. It would be on a Sunday, brunch, you could bring the kids, they’d see a show, and the far-right conservatives leapt on this and they put it together with frankly the Qanon narrative that’s been out and it was “they’re out to get your children.” The demonization, dehumanization and moral panic around children in our community somehow being threatened by LGBTQ teachers, librarians, performers, that is the threat that’s going through. And when you demonize someone to that extent and you make them feel like an existential threat to you and your children, there’s no wonder, again, that we get this kind of violence.

What she’s actually saying is that the people who are against 1st graders  to pole dance, against dressing kids up in drag, against biological men dressing as women and performing provocative dances for tips, and against all of the other extreme, radical ideologies of the LGBTQ mob are the ones who are threatening kids.

People who are against this kind of behavior, aka people with a functioning brain and a moral compass, are the threat? That makes no sense. This lady has got to be kidding.

It is highly inappropriate for children to be exposed to provocative drag queens and their explicit content. Not to mention, schools shouldn’t be facilitating conversations or providing material or curriculum that confuses kids about their gender or about anything related to their sexuality. That's something that can be done based on a parent’s choice and at their own homes.

Unfortunately, Zadrozny seems sincere. She’s just as brainwashed as the rest of her cult who think that everything needs to be rainbow washed and that kids are the best way to cultivate an army of alphabet folk.