Man on the run…no, literally. 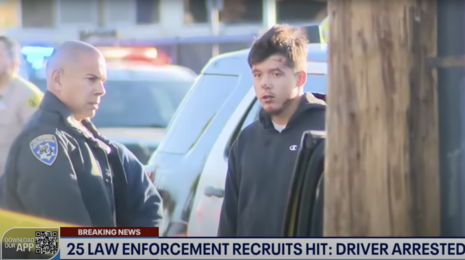 Gutierrez, 22, reportedly charged toward 75 law enforcement recruits as they were out for a training run in Whitter, California, leaving 25 with injuries ranging from “head trauma to loss of limbs” and another hospitalized and on a ventilator.

Based on video footage taken near the scene, the SUV was spotted on the left side of the road and didn’t appear to slow down or swerve as it headed toward the joggers. Some reports even indicate that Gutierrez may have sped up just before he collided with the group.

Authorities said the attack was intentional, yet Gutierrez was still released Friday.

"Due to the extreme complexity of the investigation, which includes ongoing interviews, video surveillance review, and additional evidence needed to be analyzed, homicide investigators have released Mr. Gutierrez from the Sheriff's Department custody," authorities said.

Supposedly, the investigators needed more time to collect evidence, so they released Gutierrez - though the "why" of it is still a mystery to me.

Gutierrez's lawyer said she had “no doubt that an in-depth investigation will confirm that Nicholas is a hard-working young man who holds no animosity toward law enforcement, and this was an absolutely tragic accident.”

A “tragic accident” in which Gutierrez ended up on the wrong side of the road and charged full speed ahead into a very obviously large group of runners. Keep in mind, officials indicated that Gutierrez had no alcohol in his system at the time of the wreck, so unless his soul temporarily left his body and caused him to crash into the officers, it's hard to imagine the incident was just a freak accident.

“We operate under prosecutor George Gascón. We definitely have grave concerns about his ability to prosecute,” Los Angeles County Sheriff Alex Villanueva told NewsNation. “We are actually going to provisionally release him (Gutierrez) until we can have the case iron-clad, iron-proof, and submitted to the DA for filing consideration.”

I guess the message here is that Gutierrez is out on the road so if you're in LA and decide to go for a run today, beware. Prayers go out to the recruits for their speedy recovery.