New York Democratic Governor, Kathy Hochul’s latest dumb decision is her ban on realistc looking toy guns. No, this is not a satirical article. 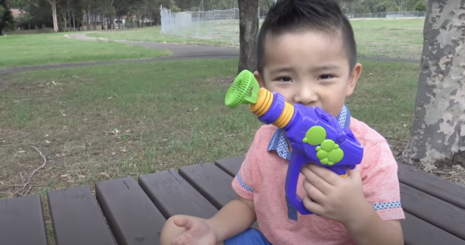 Late last month, Hochul signed a bill that required toy guns to be manufactured with bright colors while also prohibiting the sale of guns that are black, blue, silver or aluminum, Fox News reported. The idea is to ban anything that could be mistaken for a real gun in an attempt to bring down the crime rate in the city.

“Restricting these realistic-looking devices will ensure misleading and potentially dangerous devices are off our streets, keeping kids, law enforcement and all New Yorkers safe,” she said when she signed the bill.

Though I think this bill is dumb and is not going to help the crime rate in NY, Senator Brad Hoylman (D-NY) was in full support.

Improperly designed imitation guns pose an unnecessary and indefensible risk to the lives of our children. Since 1994, there have been at least 63 shootings in New York State as a result of imitation weapons being mistaken for real firearms, at least 8 of which were fatal. From now on, however, toy guns in New York will no longer be mistaken for real weapons. I am elated that Governor Hochul signed our bill with Assembly member Abinanti to clarify the definition of an imitation weapon, requiring toy guns to be brightly colored or constructed entirely of transparent or translucent materials, and will protect the lives of our kids and police officers alike.

This isn’t the first time toy guns have been targeted. Back in 2018, Walmart stopped selling “Assault-Style” toy guns. “We are also removing items from our website resembling assault-style rifles, including nonlethal airsoft guns and toys. Our heritage as a company has always been in serving sportsmen and hunters, and we will continue to do so in a responsible way,” the company said back in 2018.

Similarly, Twitter got rid of the black revolver and replaced it with a green water gun back in 2018 and Apple replaced its pistol with the less offensive water gun too.

Unironically, people are still dying. Banning guns isn’t the solution to crime. Criminals are going to break the law, no matter what the law is, that’s what they do!

Nonetheless,  Hochul also recently prohibited concealed carry weapons in a whole list of places including churches, public transportation, Times Square and entertainment venues. All of these places have the potential for a criminal to enter and wreak havoc. Yet, Hochul doesn’t want people to be able to defend themselves.

Law abiding citizens and legal gun owners should have the right to protect themselves when needed. Eliminating their ability to do that is not going to stop crime in places like New York, it’s just going to enable criminals to hurt other people with no consequence.

Guns aren't the problem. Bad people are the problem. Until Hochul and her woke clan start to realize that, I doubt the crime rate in NY will be going down anytime soon.

Anyways, for the time being, I will be looking for the number of people who have been killed with a toy gun. If you are able to find that number, please send me an email so I can update my story.