No kids are safe from the groomers in schools. 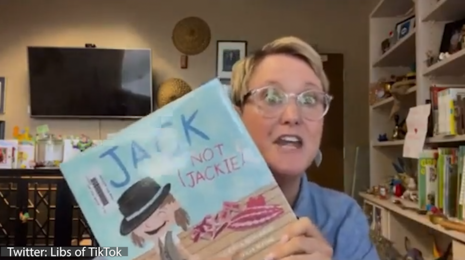 A public elementary school principal in Minnesota promoted a book about a transgender toddler called “Jack Not Jackie” for her kindergarten through second grade students to read this summer. According to Libs of TikTok, the video promotion sparked controversy and has since been deleted and an apology was released.

Principal Stacey DeCorsey reportedly posted a video to the Excelsior Elementary School Facebook page where she listed her recommended summer reading books. “Jack Not Jackie” was deemed a “phenomenal read.”

Alright then, let’s break down this “phenomenal read.” Shall we?

According to the synopsis, Jack (Not Jackie) is about a big sister, Susan, learning how to love her transgender brother.

In this heartwarming picture book, a big sister realizes that her little sister, Jackie, doesn't like dresses or fairies--she likes ties and bugs! Will she and her family be able to accept that Jackie identifies more as "Jack"

In the book we also learn how Jackie and Susan’s parents help their toddler cross-dress and affirm her delusional sense of identity.

The book is sick and twisted and whoever promotes it is no better.

As a result of necessary controversy over the perversion of the book, the video promotion was deleted from the elementary school’s Facebook page and an “apology” was released.

In the apology, DeCorsey claimed that her intention was “ to support our transgender students who are often overlooked and misunderstood in schools.”

Yeah, no. Transgender students and elementary students should never be used in the same sentence.

In all honesty, I wouldn’t even call DeCorsey’s video an apology. It was more of her justifying her promotion of the book and there was no actual remorse for her actions.

If this book was recommended for summer reading at the Excelsior Elementary school, it makes you wonder what else is being promoted in the school and other schools like it. Does teaching a warped perception of reality take precedence over teaching things kids actually need to know?