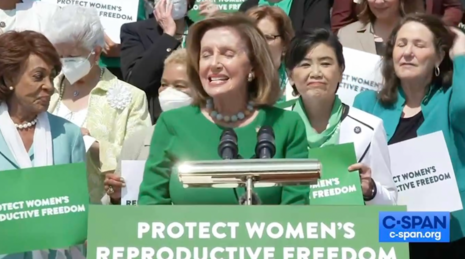 The House passed the Women’s Health Protection Act and the Ensuring Access to Abortion Act on Friday, July 15 in an effort to help secure the right to murder innocent babies nationwide, HuffPost reported.

After the Supreme Court overturned the 1973 Roe v. Wade verdict, the Biden administration and his liberal minions have been actively pursuing legislation to keep abortion legal. On July 8 Biden signed an executive orderto expand abortion rights and one week later, the House passed these two pro-abortion laws.

The Women’s Health Protection Act aims to codify Roe’s protections and reportedly passed in a 219 to 210 vote. The Ensuring Access to Abortion Act is “a bill that seeks to protect people who are forced to travel out of state to receive abortion care” which pased in a 223 to 205 vote.

HuffPost was sure to point out the “doomed” state for these pro-abort laws.

As Republicans at the state-level act quickly to ban and severely restrict abortion, activists have urged federal lawmakers to take steps to protect access. And although the bills are likely doomed to die by filibuster in the Senate, the House passage lays the groundwork for future steps ― and sets the stage for more intense pressure on Democratic senators and the Biden administration to do something.

On June 30 Biden said he would temporarily  suspend the filibuster in order to pass legislation that would legalize abortions nationwide, so even though these bills are unlikely to pass in the senate, there is still a chance.

Friday morning, Speaker Nancy Pelosi was optimistic about making "reproductive freedom the law of the land."

HuffPo highlighted Pelosi's pro-abortion statements, "Is this the United States of America? Where Republicans in these states can say to these women, ‘You cannot cross state lines for your own good health?’”

It is laughable that Pelosi still calls herself a “devout” Catholic. The only thing she’s “devout” to is abortion.

HuffPost reported that the Women’s Health Protection Act passed in the House last fall but failed not once, but two times to pass in the Senate this year.

Though these bills are unlikely to pass in the Senate, they still shed a disheartening light on the baby killing mantra a lot of our democratic leaders possess.