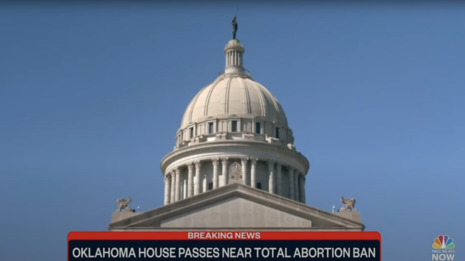 The Oklahoma legislature just passed a bill that will ban abortion from the moment of conception (*cue liberal tears).

The bill, HB 4327, prohibits abortion unless it's “necessary to save the life of a pregnant woman in a medical emergency” or “the pregnancy is the result of rape, sexual assault, or incest that has been reported to law enforcement.”

In my opinion, the bill could be more strict, but it's a major step in the fight for life.

HB 4327 also mentions that civil action may be brought against anyone who performs an abortion or aids and abets in an illegal abortion. Take THAT baby killers.

Despite this bill being the strictest pro-life bill in the nation, one that truly values all human life, leftie blue checks on Twitter think it’s "horrifying" - no, not the genocide of innocent babies, but the bill that would protect babies. That’s what the Twitterati think is horrifying.

Absolutely horrifying bill out of Oklahoma. Abortion care is essential health care! We all deserve the ability to make personal decisions that impact our lives, families, and futures. https://t.co/dnLmBPnsPa

This extreme legislation is about controlling women—and it will have deadly consequences.

Now more than ever, representation matters. As a woman of childbearing age, I'm ready to fight in the Senate to codify Roe. https://t.co/pZkfDUT0ry

The cruelty...women are going to die because of this.

The Women’s March thinks the bill is “unconstitutional” … but killing babies isn't? Okay, sure. That makes sense.

Oklahoma Republicans passed the most restrictive abortion law in the country, outlawing nearly all abortions at fertilization.

Once signed by the governor, the bill will take effect immediately – cutting off MILLIONS from critical reproductive care.

Leave it to Planned Parenthood to save the day for the pro-abortionists, “We’re here with you, Oklahoma,” it tweeted. Then it offered a phone number for people to call if they “need an abortion.”

We’re here with you, Oklahoma. We're fighting this ban in the courts with @reprorights and will do everything in our power to stop OK from blocking patients from the essential care they deserve.

The replies to a bill that could quite literally save thousands of lives were disheartening but unsurprising for the left. Kudos to Okla. for passing a life-affirming bill prior to a final decision of Roe v. Wade. Hopefully other states follow suit and we can stand together to end the slaughter of the unborn.