Post’s Anti-Science is In the Stars! WashPost Wasted 45 Pages on Astrology 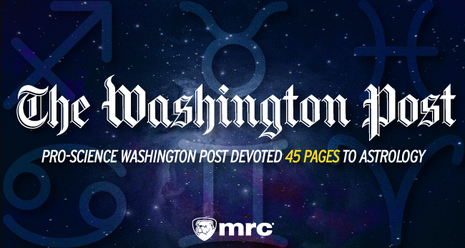 The Washington Post  isn’t pro-science after all. The paper devoted the equivalent of at least 45 full newspaper pages in the past year to … astrology.

The newspaper staff apparently took the ‘60s hit to heart: “Sign, sign, Everywhere a sign.” The Post’s (Sagitarius) pages were a Cancer, and a Gemini and a Virgo and more.

The paper’s daily horoscopes from February 1, 2020 to January 31, 2021, wasted roughly 382 news columns, or about the page count of an entire daily newspaper with “life advice” based on a reader’s birthdate.

Astrology is the furthest thing from scientific fact, but that didn’t stop The Post (Sagitarius) from describing Republicans as “anti-science,” “science denialists” and having “contempt for science” more than 70 times in those months.

On August 20, WaPo columnist Jennifer Rubin (Gemini) claimed the Republican Party has devolved into a “cesspool of bigotry and mind-numbing conspiracies, with a large dollop of science denial.” She also accused “anti-science” conservatives of being “myth-makers” on Nov 6 and on July 20 she said they “mouth anti-science claptrap.” On Dec 14, WaPo reporter Paige Cunningham (Taurus) called former president Donald Trump the “most anti-science president in modern history.” The newspaper overlooks the fact that Trump and conservatives know basic scientific truths like unborn babies are humans and men are different than women.

Horoscopes and astrology are an especially wacko brand of pseudoscience that ascribe spiritual powers to stars and planets. Astrologists claim that fiery gasses and space rocks control every human success, feeling, and romantic relationship.

Astrology is so scientific that scientists have repeatedly rejected its findings as junk. Britannica even admits astrology is “widely considered today to be diametrically opposed to the findings and theories of modern Western science.”

WaPo staffers and far lefties love to claim they “follow the science.” But ironically, as it turns out, they follow their horoscope instead.

The Washington Post’s own Dec. 6 birthday horoscope (Sagitarius) said that it often will “find the quickest route to fulfillment” and “feel very proud and good about” itself.  That’s one way of describing the newspaper’s smug and selectively “pro-science” attitude. (The Post was founded Dec 6, 1877).

Most (level headed) readers probably don’t put all their faith in The Washington Post’s daily horoscope reading, but that does not absolve the newspaper of its blatant hypocrisy. The Post indulges readers’ curiosity for pseudoscientific astro-crap while refusing to even acknowledge honest scientific questions from conservatives.

Instead, The Post (Sagitarius) had the audacity to call conservatives the anti-sciencers while devoting a WHOLE newspaper’s worth of space to astrological garbage.

Methodology: The Media Research Center analyzed one year of print Washington Post newspapers from Feb 1, 2020 to Jan 31, 2021. The column inches of the astrology forecast were tallied for each day. Average newspaper page count was also counted.