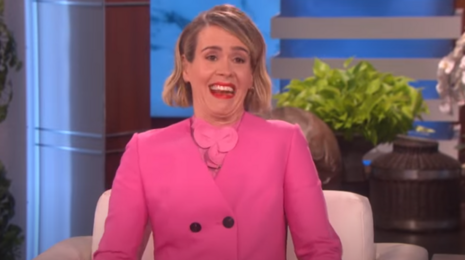 On the last day of Women’s History Month as well as International Trans Visibility Day, a woke Twitter nobody came for a lesbian … ironic.  American Horror Story actress Sarah Paulson didn’t have her pronouns in her bio, which -- as all the cool kids know -- is super non-inclusive. While the mini account had no expectation that Paulson would see the tweet, never mind reply, “she/her” probably also never thought this would erupt to a full on Twitter feud.

The account tweeted to Paulson “@MsSarahPaulson put ur pronouns in your bio it’s not that hard” to which Paulson replied “It’s also not that hard for you to not tell [me] what to do.”

As you’d expect from the cancel culture mob, the conversation did not end there. According to an article from GayTimes (yes, apparently that is a thing) Twitter nobodies from all over the web started criticizing Paulson and her girlfriend, Holland Taylor, who is 32 years her older.

Some of the most tasteful included:

At this point, they aren’t even making a pretense of caring about social justice, these people are just disgusting and full of vitriol.

Yet, some stood in solidarity against the backlash:

Even as a gay person, the wrath of the SJW’s isn’t something to mess around with unless you want a taste of insanity.

For heaven's sake! Lefties talk about being “inclusive” yet even when one of their own isn’t far leftie enough, they try to cancel her.

Since the scandal, the original tweet has been deleted and the account posted an apology. Guess “she/her” couldn’t take the heat.