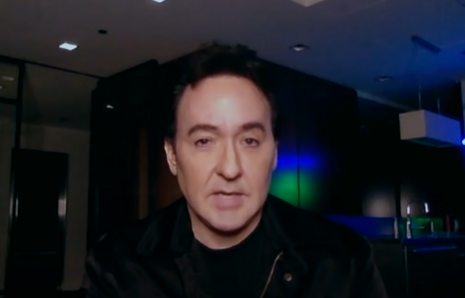 Many people have been feeling stressed about the presidential race, mostly because they believe deep, moral issues are at stake. Everybody feels strongly about those issues, and the unusually long wait for the election results has exacerbated the tension. But Cusack has, as usual, let his feelings get the better of him, and he exploded into a bunch of anti-American tweets on November 5, with one of them stating:

They actually already have shut him down. What happened to the right to freedom of speech? America is famous for that valuable right. Cusack himself has been taking full advantage of it for ages, to the point of abusing it. Is it perhaps because these “lies” contain less falsehoods and more truths than Cusack would care to admit?

Anyway, presidential tweets like “STOP THE COUNT!” are hardly going to get people killed. (Then again, lefties are so sensitive, anything could give them a heart attack.)

Cusack’s demand is obviously dangerous because it could lead to full suppression of speech, a sure sign of dictatorship. Oddly enough (or, as expected), Cusack fails to see himself as a promoter for totalitarianism, since he himself believes that Trump is the dictator: “America is a deeply fucked up place - that so many citizens could not cut through Paritisan divisions & propagandas - is profoundly troubling - Trump a child abducting gangster nazi Sex  predator - but 70 million stood up through the pandemic & threats & kicked his ass” 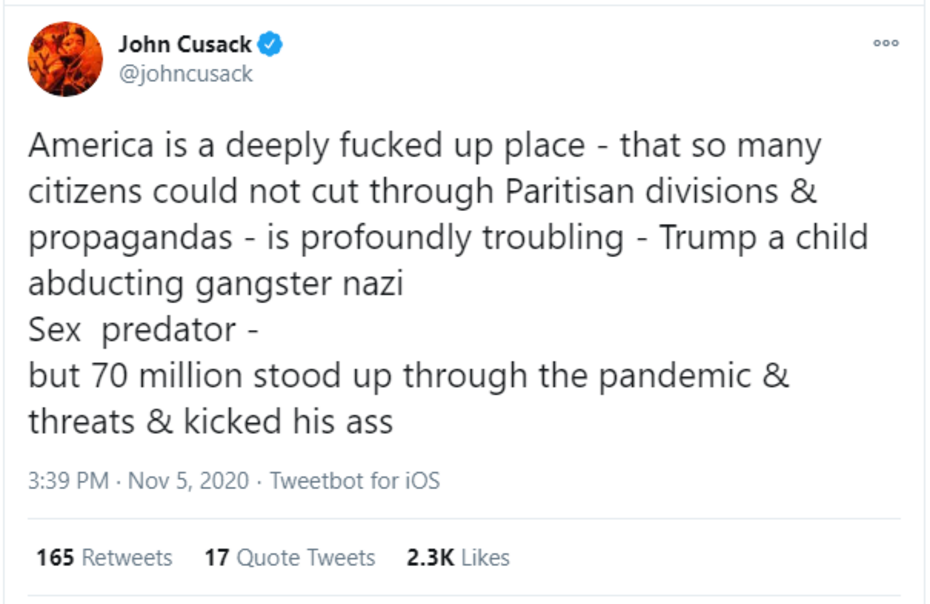 This was not the first time, even this week, that Cusack has referred to Trump and his supporters as Nazis. He seemed to have an unhealthy obsession with them.

His favored candidate doesn’t get as many votes as he had hoped, hence America is a deeply messed up place. Typical leftist reasoning. All those Black Lives Matter riots and calls to defund the police certainly weren’t a turn off.

And speaking of “propagandas,” who tried to portray Joe Biden as a moderate candidate for his party? Who tried to claim that Kamala Harris wasn’t the Princess of Darkness? The press is now the voice of the Democrat party. Should our news media even be considered as reporters anymore, given that all they spout are propaganda for the Democrats?

Despite his righteous anger against the “child-abducting, gangster, nazi, sex predator,” Cusack had no reproaches against Biden, infanticide supporter, sexual assaulter, and corrupt business enabler. As if to confirm these realities, Biden himself stated that he would be the most progressive president the United States will ever have.

“70 million stood up through the pandemic & threats & kicked his ass?” One has to ask, who’s threatening Biden voters? Biden voters aren’t the victims here. It’s Trump voters who get all the heat for their political views. They get them from the Democrat-loving news outlets, and from unhinged leftist celebrities like John Cusack, as this tweet from November 5 shows: “3 as far as 67million voting for trump Part reflective asleep tribal  Fox News crowd Part  cowards who don’t want to fight Part conservative Catholics with all their pro life hypocrisy  Business class who can’t see past a tax cut - &  a big bunch of flat out fascists & racists” 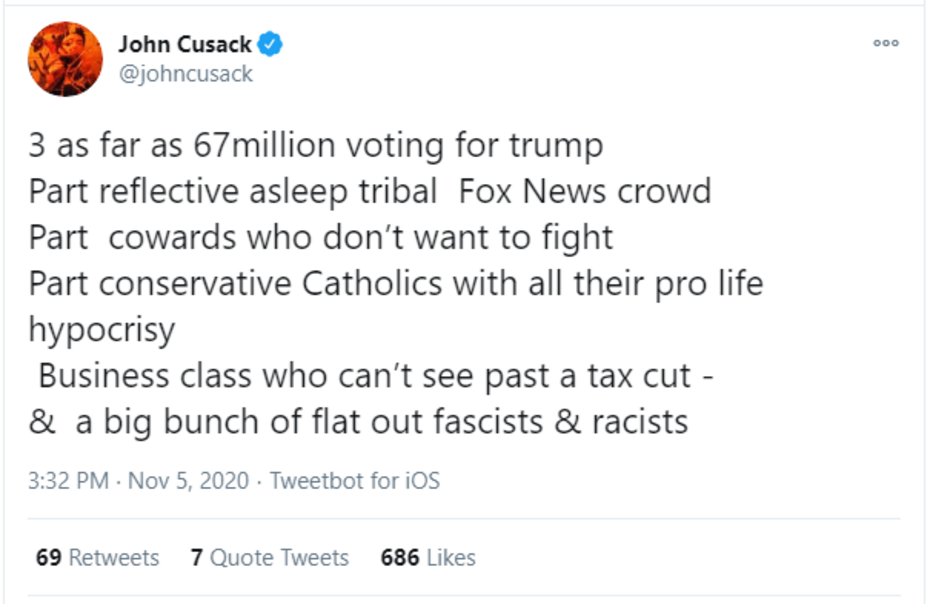 Cusack just insulted almost half of America’s population. It’s a good thing vendettas aren’t a thing in this nation. He’s never considered that toxic people like him are the reason these people vote for Trump?

“Cowards who don’t want to fight.” Now Cusack is lashing out at people who may have potentially voted for the Democrats.

Yes, pro-life Catholics are hypocrites for following the Fifth Commandment (Thou shalt not kill) and Jesus’s teaching to love your neighbor as yourself, the old and new laws. Biden and Pelosi, self-proclaimed Catholics who are slavishly devoted to Planned Parenthood’s wholesale slaughter of American infants, are not hypocrites at all.

The business class actually does see past the tax cut, and what they see is most displeasing. Is it supposed to be surprising that they’re voting for Trump?

Cusack’s ending to his rant included the term “fascist,” in reference to Trump’s voters. But Cusack himself has proven that he wants to suppress freedom of speech. Who’s really the fascist here?