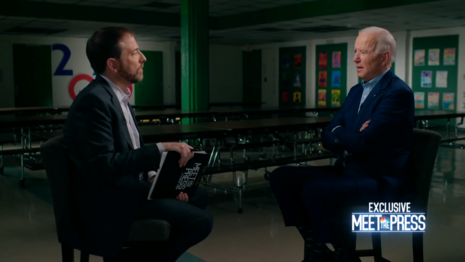 TV journalists have insisted throughout the 2020 election cycle that Democratic Presidential hopeful Joe Biden represents the “moderate,” “centrist” wing of his party, with some even worrying that his agenda might be too far to the right for his party’s progressive base to stomach. Yet not even Biden himself agrees with that lame spin, having promised his administration would be among the “most progressive” in “American history.”

And if his own campaign promises are anything to judge by, he’s right. Yet journalists stubbornly continue to label him a moderate. For example, back in 2019 veteran political reporter Eleanor Clift opined on MSNBC’s The Beat that Biden’s “ideology, that he’s too centrist,” might help him in the general election. In March of this year, CBS Evening News ran report by political correspondent Ed O’Keefe which absurdly labeled Biden’s plan to expand the Affordable Care Act as “moderate.” And just last month, CNN’s Inside Politics host John King claimed that Biden was not known “as a liberal per se; he’s more from the centrist part of the party.”

To see how sharply Biden’s platform in his own words contrasts with the media’s framing of it, watch the video below.

■ Gun Confiscation: Biden has stated on multiple occasions that he intends to ban “assault weapons.” Presumably his definition of an “assault weapon” includes numerous commonplace semiautomatic rifles, considering back in March, Biden was filmed telling a union worker that he would “take your AR-14s [sic] away.”

■ Government Health Care: Biden’s current healthcare proposal is more extreme than the original Affordable Care Act that was passed when he was Vice President. In addition to “massive” subsidies for existing ACA programs, Biden’s proposal includes a “public option,” which would establish a government-run health insurance agency that would compete with private sector insurers.

■ Aid for Illegal Immigrants: During the June 27, 2019 Democratic debate hosted by NBC, Biden (along with every other candidate) promised that his plan would offer health coverage to illegal aliens at taxpayers’ expense. The former Vice President also has stated that he does not believe illegal aliens arrested by local police should be turned over to immigration authorities.

■ Massive New Taxes: Biden proposes raising the corporate tax rate from 21 percent to 28 percent, as well as hiking up taxes on those in upper income brackets, which the left-leaning Tax Policy Center says would remove $4 trillion from the private sector over ten years. In addition, he has proposed significantly raising capital gains tax rates, to a top rate of 39.6 percent.

■ Radical Environmental Policies: Biden’s recent proposal for a “clean energy future” would cost taxpayers — by his campaign’s own reckoning — $2 trillion dollars over four years. While discussing his hopes to eventually do away entirely with fossil fuels, he suggested that coal miners “learn to how to program for God’s sake.” He has even proposed jailing fossil fuel company executives: “Put them in jail. That’s what I propose — I’m not joking about this.”

In a February interview on NBC’s Meet The Press, Biden himself pushed back against the centrist label:

Considering Biden’s platform is indeed more “progressive” than that of any Democratic nominee in history, it is deceitful for the media to mislead audiences into believing he is a “centrist” or a “moderate.”