Joy Behar Insists: ‘Jesus Would Have Made the Cake’

Joy Behar may not understand the ins and outs of the legal battles surrounding gay wedding cakes, but she certainly claimed to know how Jesus would handle such situations.

On Friday, the co-hosts of The View welcomed Colorado baker Jack Phillips and Alliance Defending Freedom attorney Kristen Waggoner to discuss their case, which the Supreme Court will hear next term.

When Charles Craig and David Mullins sought to purchase a custom cake for their wedding, Phillips respectfully declined to bake it. In addition to Halloween, adult-themed and anti-American creations, the faithful Christian also made it a personal policy to avoid baking for gay weddings. That conscientious decision landed him in hot water.

For the attorneys representing the gay couple, discrimination stands at the center of the case. But as Waggoner told the ladies of The View, freedom of expression is the real issue at stake.

“The same laws that force Jack to design custom expression will force you to speak messages that you don't want to speak,” Waggoner told Behar.

That argument didn’t really sink in. When several hosts continued to press the point of “judgment,” Phillips explained himself. 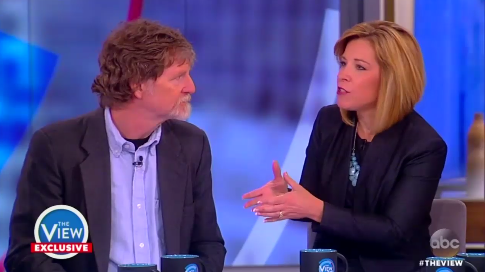 “I'm not judging these two gay men that came in,” he clarified. “I'm just trying to preserve my right as an artist to decide which artistic endeavors I'm going to do and which ones I'm not.”

“Did you ever ask yourself what would Jesus do in this particular situation?” Paula Faris asked Phillips. “Instead of denying them, do you think maybe Jesus would have said I don't accept this but I'm going to love you anyways?”

As Phillips tried to explain himself, Behar continued to insist loudly: “Jesus, that’s a deal breaker. Jesus is going to make the cake.”

Even while facing a barrage of other questions from the co-hosts, the soft-spoken baker stuck to his message.

“I serve everybody all the time,” he stressed. “But I don't make every cake for every event.”

Waggoner tried to put the case in perspective, using the language of “dignity.”

“Have Jack talk about what it means for him to bake that cake and to violate his conscience and the dignity harm he has had to sustain as a result,” she challenged. “As well as what he goes through when he makes the cake. It's a canvas he's painting on. His heart and soul is going into that.”

If the government can mandate artistic expression, Waggoner stressed, “the state could crush every single one of us.” That applies to the fashion designers who have stated they will not dress the Trump family, as well as the florists, photographers and bakers like Phillips who have conscientiously declined to lend their services to gay weddings.