After putting their faith in Gov. Roy Cooper (D-NC), the LGBT community got a severe let down today. And they're making their displeasure known.

On the afternoon of March 30, state legislators rushed to repeal HB2 – North Carolina’s controversial law requiring students and government workers to use restrooms that correspond to their biological sex. An NCAA ultimatum was the impetus. 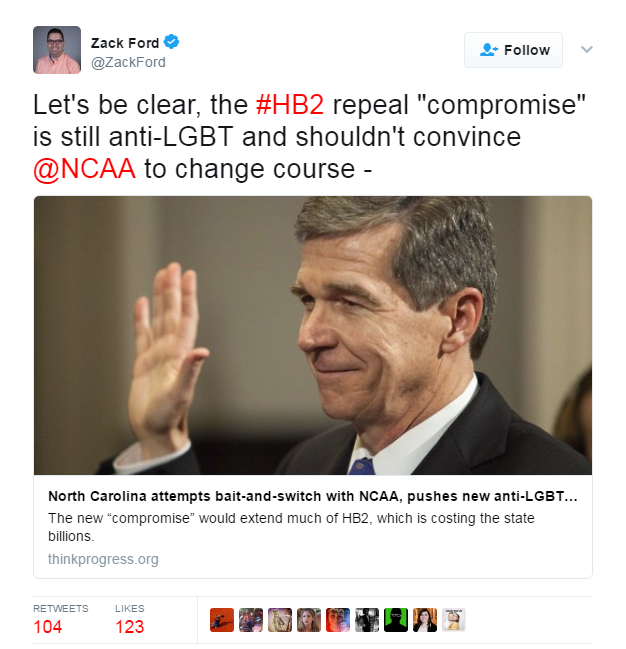 “North Carolina has just over 24 hours to cleanly repeal HB2 or they lose NCAA games through 2022,” ACLU Staff Attorney Chase Strangio tweeted on Wednesday. “How much is it worth to target trans ppl?”

That evening, news broke that a compromise deal had been reached and the repeal bill would go to the general assembly (NCGA) the next day. Before the details were released, LGBT spirits were high.

But HB142, as the repeal bill is called, did not put the ball in either court. While giving state legislators control over regulation of multi-stall bathroom use, it also precluded local governments from implementing nondiscrimination legislation through 2022.

Naturally, LGBT activists and journalists were not satisfied.

Actress Mia Farrow weighed in with a comment from NC NAACP president Rev. Dr. William Barber II, who condemned the compromise as an “insult to civil rights.” And the folks at Slate’s LGBT division, Outward, agreed, calling it an “unmitigated disaster.” 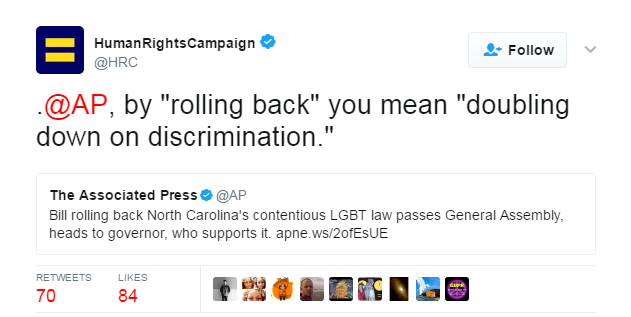 The ACLU accused the NCGA of putting “basketball over civil rights,” while the HRC pressed a continued boycott. “We urge all biz, sports leagues & entertainers who’ve fought against #HB2 to continue standing strong against hate!” the organization tweeted.

In response to an AP tweet calling the repeal bill a “rollback,” HRC got even testier. “@AP, by ‘rolling back’ you mean ‘doubling down on discrimination.’”

Clearly, activists do not intend to back off.

“We will still see you all in court, North Carolina!” Strangio tweeted after the bill was finalized. “We fight on.”

On the other side, Family Research Council President Tony Perkins believes the move signals a willingness to cede ground on safety matters. “LGBT groups' fierce opposition to this compromise is very telling,” he commented. “For the Left, the only compromise they will accept is our total surrender.”