Libs Swoon Over Trudeau’s Women’s Abortion Pledge: ‘Could He Be Any More Perfect!?’

Justin Trudeau is a liberal woman’s dream. He’s attractive, progressive and a self-proclaimed feminist. What’s not to love? 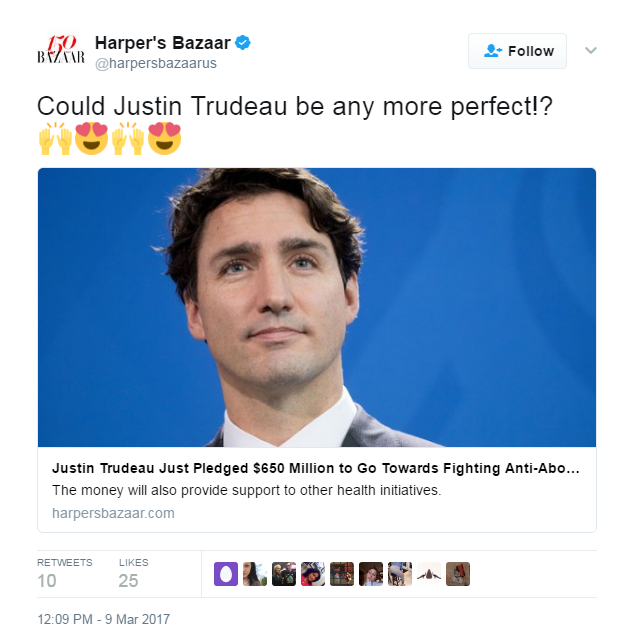 But on International Women’s Day, the Canadian prime minister made feminists across North America really swoon. He pledged to contribute $650 million to women’s health initiatives, including fighting “anti-abortion” legislation across the world.

"For far too many women and girls, unsafe abortions and lack of choices in reproductive health mean that they are either at risk, and at risk of death, or simply cannot contribute or achieve their potential through education, through involvement in their community, through a broad range of opportunities," Trudeau declared at Wednesday’s “Her Voice, Her Choice” event.

Bustle’s Laken Howard noted that the Prime Minister’s pledge was simply “another reason to love him,” contrasting with Donald Trump’s “offensive proposal” to Planned Parenthood the same week. That proposal, which simply offered a continuation of funding in return for a stoppage of abortions, was spun negatively by the networks.

During Planned Parenthood’s centennial celebration, Trudeau tweeted out a picture of himself and the organization’s president. “My warmest congratulations to @CecileRichards and Planned Parenthood on its hundredth anniversary. Here’s to another #100YearsStrong!”

Liberals can no longer logically accuse President Trump of not caring about women’s health, but they certainly will. Meanwhile, they’ll keep fangirling over Trudeau.