There’s nothing like a fake president played by a Hollywood celeb to really inspire civic duty. That’s why Julia Louis-Dreyfus, known for her Emmy-winning Veep role as politician Selina Meyer, took to the screen to encourage the millennial vote, specifically regarding the issue of climate change. (If you’re getting tired of celebrity vote videos, please know that we wholeheartedly share that sentiment.) 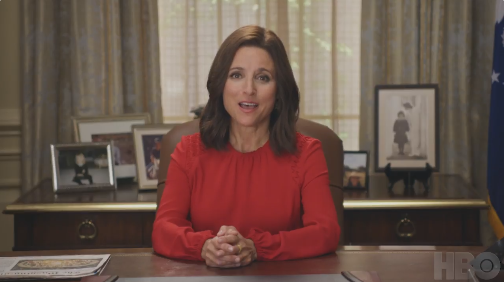 The actress recorded two videos, according to a Hollywood Reporter article. The first, a general plea for millennial votes, was recorded straight from the Veep set for “Rock the Vote.” Louis-Dreyfus sat in character behind her desk as if issuing a PSA.

The second was a plug “for Hillary Clinton and climate champions” sponsored by the NextGen Climate Action Committee. As herself, Louis-Dreyfus declared: “One thing [Trump] doesn’t talk much about is climate change and that’s because he doesn’t believe in it… and because it doesn’t have a grabbable pussy. But let’s elevate this conversation,” she continued, “and let’s say this. Hillary Clinton knows that climate change is real, and she understands its disastrous consequences. She knows that clean energy is the future…” This is a fascinating plot twist indeed. The Veep star was privy to the benefits of a large fortune, gleaned from none other than the Louis-Dreyfus Energy Corp. According to Bloomberg, the company "engages in the terminaling, storage, supply, and distribution of refined petroleum products."

“But voting for Hillary isn’t enough,” the actress opined. She then went on to accuse Senate Republicans of forming a “congressional cock blockade” against Clinton’s proposed policies. The solution? “Vote for Hillary Clinton for president! Let’s see this through,” she concluded.

NextGen Climate was founded by liberal billionaire Tom Steyer in 2013. He injected $74 million into the organization to promote a climate alarmist agenda, attack fossil fuels and back candidates who supported alternative energy (like solar).

As the largest political donor in the 2016 election, Steyer has spent millions trying to make climate change a central election issue. His efforts proved fruitful; the Democratic Party Platform, approved at the DNC in July, adopted much of his climate agenda, including opposition to coal. Steyer has also been actively trying to unite “Democratic interest groups” to campaign for Clinton’s election.