In the past 24 hours, feminist media have become collectively peeved over several issues either addressed or omitted from the debate discussions. Yet the blame fell not only on the shoulders of Donald Trump, but on the patriarchy itself.

During the 90 minute debate, moderator Lester Holt raised questions about the economy, security and racism, but abortion was noticeably absent from his agenda. This did not settle well with feminists, who armed themselves with the hashtag #AskAboutAbortion and took to Twitter to express their distaste.

NARAL was indignant, tweeting: “No question abt abortion, but we’re not giving up. We’ll keep telling moderators to #AskAboutAbortion! bit.ly/2cYljiV #DebateNight.” Hayley MacMillen – Cosmo’s sex and relationship editor – agreed, writing: “We’ll have to wait for Hillary to drag Trump for his repro rights track record but it’s going to be beautiful #AskAboutAbortion #debatenight.” 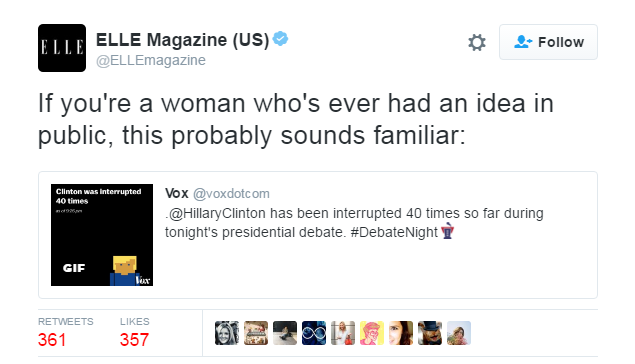 Another common anger-inspiring theme of the evening was Trump’s persistent interruptions of Clinton. Yet instead of simply calling out the brash Republican nominee, many feminists just blamed men. Elle Magazine had this to say: “If you’re a woman who’s ever had an idea in public, this probably sounds familiar:” What followed was a re-tweet from Vox showing that Clinton had been interrupted at least 40 times so far at that point in the evening. 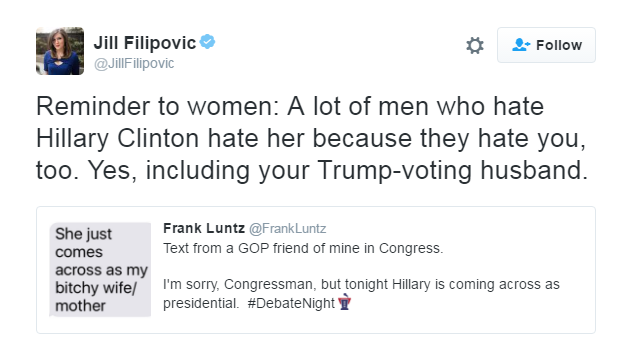 Cosmo Senior Political Writer Jill Filipovic tweeted: “Reminder to women: A lot of men who hate Hillary Clinton hate her because they hate you, too. Yes, including your Trump-voting husband.” Excuse me?

Another complaint regarded Trump’s belittling of Clinton’s experience, and just as before, feminists blamed men in general. Caitlin White, Managing Editor of Uproxx Music, tweeted: “men, everywhere: [YELLING] you have no plan. every woman ever: in fact, i have written a book about.”  Elle Magazine chipped in: “America needs more womansplainers. #debatenight.”

Here’s an idea: how about we just try to be civil and respectful to each other instead of pinning rudeness on gender?

In response to a tweet from user @davidfrum who wondered “who told Hillary Clinton to keep smiling like she’s at her granddaughter’s birthday party,” Washington Post and Cosmo contributor Kate Spencer replied: “Actually @davidfrum: men.”

When Clinton declared last night that “by the end of this evening I’m going to be blamed for everything,” the men of Twitter were probably in solidarity, saying #ImWithHer.