Producer Chuck Lorre is well known for his penchant for placing vanity cards at the ends of his shows, vanity cards which are either complete nonsense or are blatantly anti-conservative.

His anti-conservative saga continued at the end of Thursday night's episodes of Young Sheldon and Mom on CBS when he added a vanity card with a quote from Alexander Hamilton. The Hamilton quote was used in this Washington Post op-ed by Ron Chernow when Mr. Chernow stated that Alexander Hamilton would want President Trump to be impeached. Strong words, Mr. Chernow, strong words. Lorre posted the quote and gave Chernow "special thanks."

The vanity card in question was the following (transcript provided below): 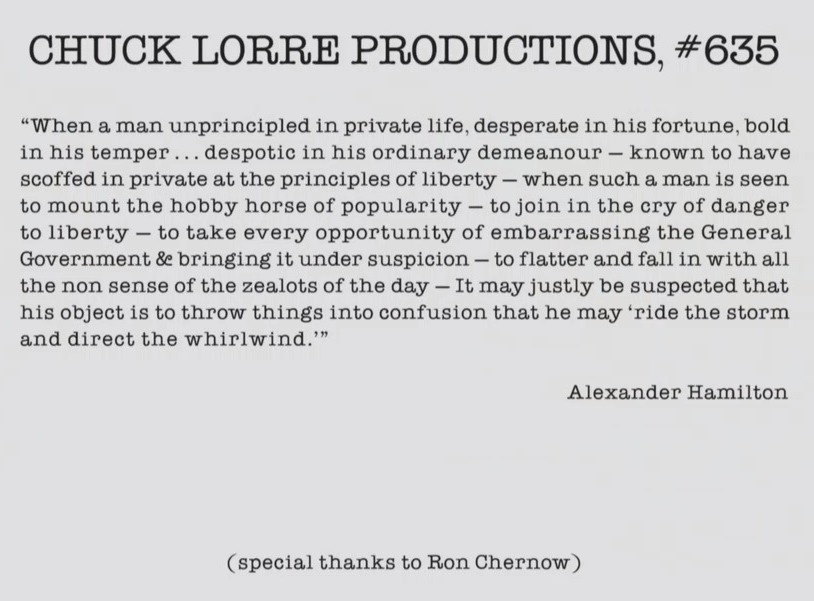 "When a man unprincipled in private life, desperate in his fortune, bold in his temper . . . despotic in his ordinary demeanour — known to have scoffed in private at the principles of liberty — when such a man is seen to mount the hobby horse of popularity — to join in the cry of danger to liberty — to take every opportunity of embarrassing the General Government & bringing it under suspicion — to flatter and fall in with all the non sense of the zealots of the day — It may justly be suspected that his object is to throw things into confusion that he may 'ride the storm and direct the whirlwind.'"

(special thanks to Ron Chernow)

Chuck Lorre has made it no secret that he is blatantly liberal and is blatantly against President Trump. Each vanity card referring to Trump seems to become more and more aggressive and obvious in its disgust and disrespect, which is kind of ironic when you think about the left's seeming obsession with respect and tolerance.