It’s another week of new sitcom episodes on CBS, so you know what that means! Time for another peek into the strange, liberal mind of the “King of Sitcoms” Chuck Lorre via his egoistic vanity cards. This time, he’s taking shots at Trump’s main allies, claiming that they’ve “surrendered their dignity and integrity,” and “their souls” in exchange for "power and prestige."

After Lorre’s CBS sitcoms Young Sheldon and Mom aired Thursday evening, they were followed by Lorre’s usual vanity card (some nights the cards vary, but tonight they were the same for both shows).

In this latest card, Lorre imagined a TV dramedy that he named Lackeys and he appeared to be referencing Mike Pence as character “Round Mike,” Mike Pompeo as “Long Mike,” Kellyanne Conway as “Crypt Keeper Kelly,” Lindsey Graham as “Lindsey Lovelace,” and Rudy Giuliani as “Rudolf (sic) the Brown-Nosed Reindeer." 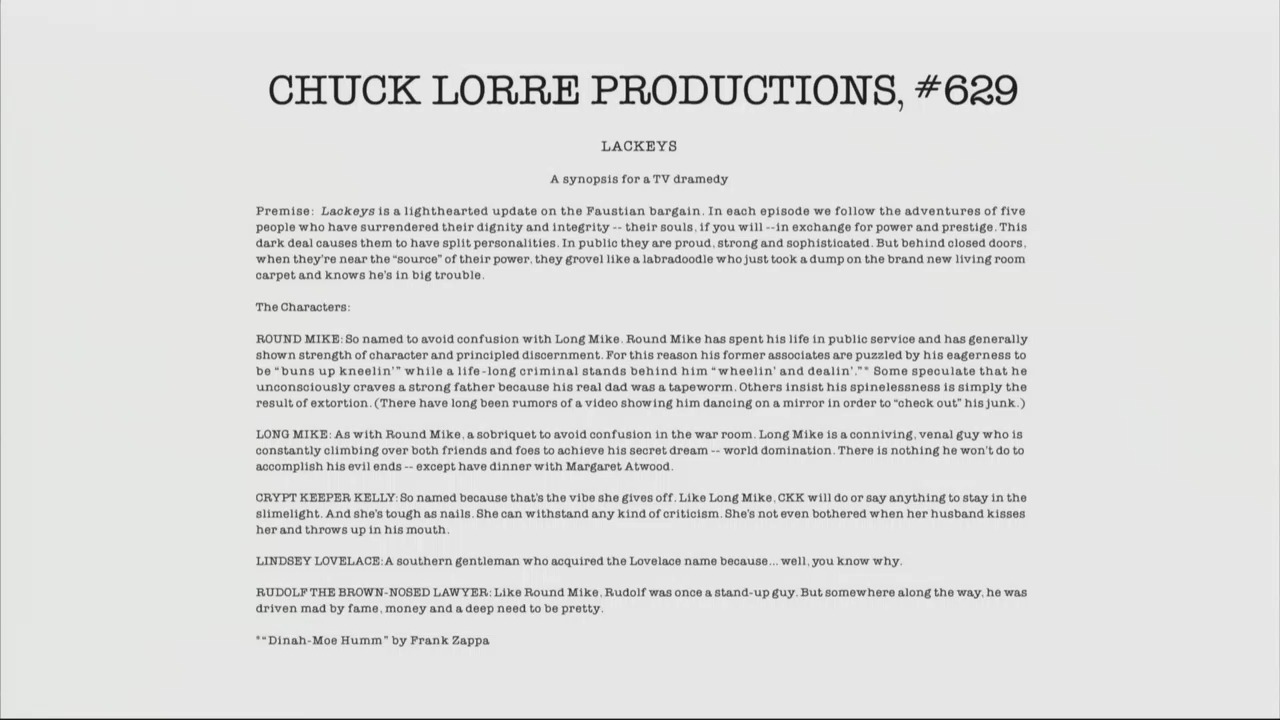 If you can't read that, the full card read as follows (with grammatical and spelling errors corrected. You’re welcome, Mr. Lorre) (click "expand"):

a synopsis for a TV dramedy

Premise: Lackeys is a lighthearted update on the Faustian bargain. In each episode we follow the adventures of five people who have surrendered their dignity and integrity -- their souls, if you will -- in exchange for power and prestige. This dark deal causes them to have split personalities. In public they are proud, strong and sophisticated. But behind closed doors, when they're near the "source" of their power, they grovel like a labradoodle who just took a dump on the brand-new living room carpet and knows he's in big trouble.

ROUND MIKE: So named to avoid confusion with Long Mike, Round Mike has spent his life in public service and has generally shown strength of character and principled discernment. For this reason, his former associates are puzzled by his eagerness to be "buns up kneelin’'" while a life-long criminal stands behind him "wheelin' and dealin'."* Some speculate that he unconsciously craves a strong father because his real dad was a tapeworm. Others insist his spinelessness is simply the result of extortion. (There have long been rumors of a video showing him dancing on a mirror in order to "check out" his junk.)

LONG MIKE: As with Round Mike, a sobriquet to avoid confusion in the war room. Long Mike is a conniving, venal guy who is constantly climbing over both friends and foes to achieve his secret dream -- world domination. There is nothing he won't do to accomplish hi evil ends -- except have dinner with Margaret Atwood.

CRYPT KEEPER KELLY: So named because that's the vibe she gives off. Like Long Mike, CKK will do or say anything to stay in the slimelight. And she's tough as nails. She can withstand and kind of criticism. She's not even bothered when her husband kisses her and throws up in his mouth.

LINDSEY LOVELACE: A southern gentleman who acquired the Lovelace name because... well, you know why.

RUDOLF THE BROWN-NOSED LAWYER: Like Round Mike, Rudolf was once a stand-up guy. But somewhere along the way, he was driven mad by fame, money and a deep need to be pretty.

Strange how liberals call for respect towards the LGBT community while constantly cracking gay jokes like these, as well as for women’s rights and an end to body shaming while bashing various conservative women for their looks (and in this case, men, too). Maybe Lorre’s character in this dramedy could be “Hypocritical Charles?”