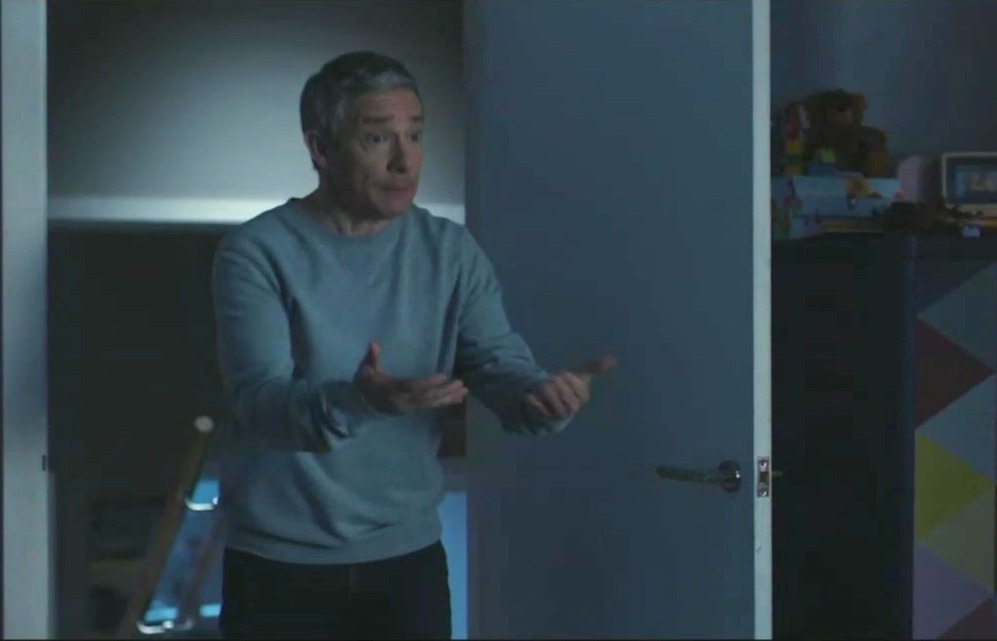 Urban Dictionary defines the term "breeders" as when people think "the sun rises and sets for their child/ren... and are in general very selfish and greedy." The site also suggests "breeders" is a derisive term used to describe heterosexual couples who "use their parenthood status or their children as an excuse to get their way." The definition might also wish to include inappropriate, as the titular unmarried parents, Paul (Martin Freeman) and Ally (Daisy Haggard), of FX’s latest crude, lewd, and offensive show Breeders curse, constantly.

"Fuck" is a word which comes out of Paul and Ally’s mouths quite often. It’s uttered 65 times in the show’s twofer premiere episodes. There’s also "prick" heard three times and the c-word three times, quite often in the presence of their children, Luke (George Wakeman) and Ava (Jayda Eyles). This includes in the show’s very first scene in its March 2 episode, “No Sleep”:

Paul [to himself]: Don't do this, mate. Don't do it. It doesn't help. If you're going in, you scream, they cry, you hate yourself. [Muffled screaming] Breathe. Talk to them. Do better, Paul. Be better.

Paul: Jesus fucking Christ! How many times do I have to tell you to be quiet? No, tell me, how many times have I told you? You think I'm gonna put up with this? I'll fucking go. I don't give a shit. In fact, I'm gonna go, tell-- tell Mummy that Daddy's gone. Right? 'Cause he couldn't stand to be around the fucking noise anymore. Then, when you told her that, you can watch her cry, and then you can cry some more, and you'll all be fucking crying. Sorry. I just need you to be quiet. I'm working. I didn't mean any of that. Oh, man, I'm sorry. I'm sorry.

Ally: You all right?

Paul: Yeah. It's just the level of noise. Do you know what I mean, it's-- I've got to prep for this thing tomorrow, and--

Ally: Yeah, I know, Paul, they can be real pricks.

Paul: I would die for those kids, Ally. But often, I also want to kill them.

Ally: Yeah. It's a conundrum, isn't it? Trying to work out which duvet to suffocate them with.

Paul: Well, the tiger one's thicker. I would definitely murder our children with the tiger duvet.

As if Paul’s foul mouth weren’t enough, he also regards God to be a “psychopath.” While the show may be called Breeders, Paul and Ally don’t seem to be particularly happy about such a role. Paul, after all, blames it on how “you two came along” when his son asks why he didn’t pursue being a cartoonist. Can we really blame Paul when he says, “I don’t want the kids to turn out like me.”

Then there’s Ally estranged father, Michael (Michael McKean). Where to begin. He’s introduced when Ally punches him in the testicles, which leads to a joke of Luke declaring they’re called “riceicles.” Ally’s father needs to come stay with them and is full of unhelpful advice, such as telling the kids “don’t do your homework.” He proudly informs his grandchildren that he dropped out of school at 14 and “education is for idiots.”

What will next week’s episode bring? Whatever it is, we can expect more frantic and inappropriate parenting with dozens of f-bombs.