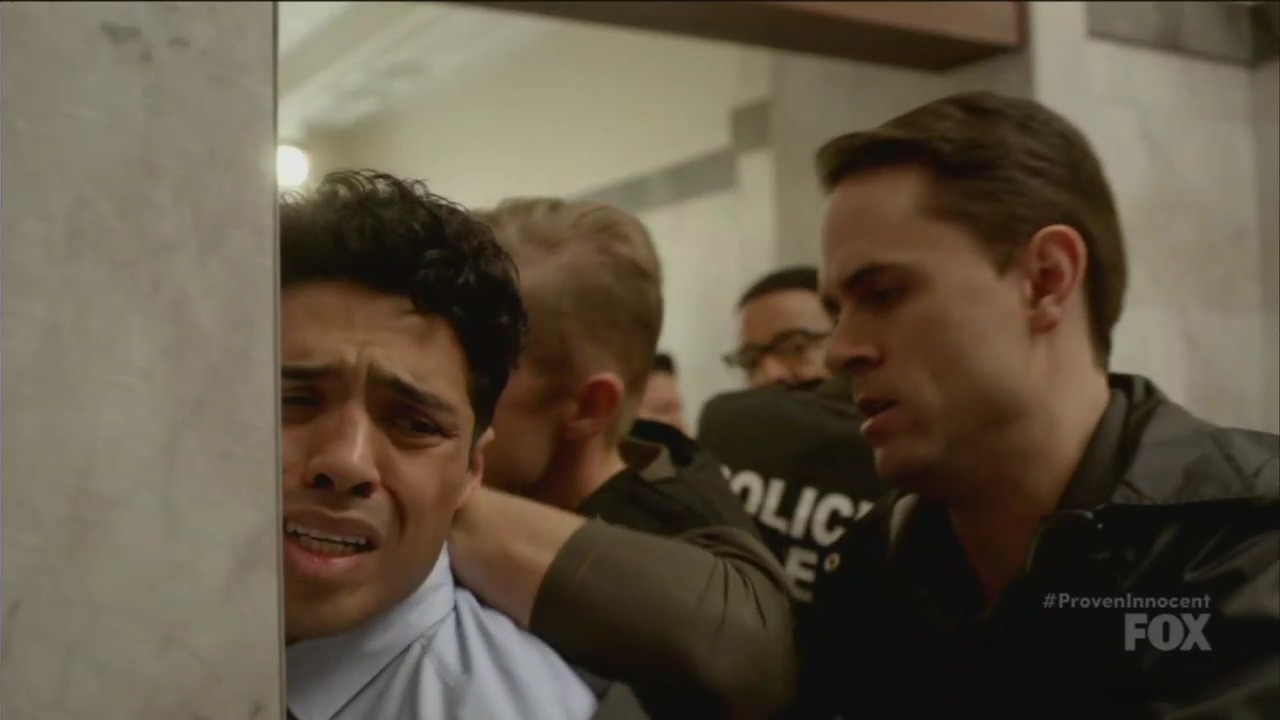 With just one episode left before the season finale, Fox’s Proven Innocent finally delves into immigration policy in its May 3 episode, “In Defense of Madeline Scott-Part 1.” It's also not the first episode this week to tackle the issue, with May 2's Grey's Anatomy gracing viewers with stories of families separated and "caged like animals."

With title character Madeline Scott (Rachelle Lefevre) having to worry about being on trial, again, for murder, it’s up to her law partner Ezekiel ‘Easy’ Bourdreau (Russell Hornsby) to defend a DACA recipient, Hector Costa (Josue Aguirre), against a murder charge.

While Hector is granted a new trial, the good news doesn’t last for long, as ICE officers come rushing over to detain Hector, threatening to deport him back to El Salvador, even slamming him against the wall, as his mother, Isiodra, sobs he’ll be killed by MS-13 if he’s sent back.

Easy is then seen arriving to the predictably loud, rushed, and crowded scene that is immigration court, and even steps in to provide emergency counsel for a four-year-old Guatemalan boy named Leonardo. The judge seems perfectly willing to continue with the deportation proceedings of a child, until Easy steps in. It’s not just an opportunity for Easy to be a hero; he even gets to call the immigration policy “nonsense” and the judge seems to suddenly be none too pleased with the U.S. Attorney.

Easy: Listen, there's no need to do that.

Hector: I haven't been there since I was a baby, man.

Easy: What are you doing? You're treating him like a criminal.

ICE officer: Stay back. I need you to settle down.

Easy: You did this.

Assistant State Attorney Gerald Warren: Me? What are you talking about?

Easy: You lost the hearing and then you contacted ICE.

Warren: I didn't call anyone. This is the first I'm hearing about this.

Easy: I won't let them deport him, and that's a promise.

Judge: Everybody settle down. Leonardo Gonzalez, do you understand this proceeding?

U.S. Attorney Maureen Riley: Leonardo Gonzalez was separated from his parents. They're in process to go back to Guatemala.

Judge: Leonardo, have you talked to an immigration attorney?

Judge: Aren't you here on another matter, Mr. Boudreau?

Easy: I am, Your Honor, but I'm stepping in to add a dose of common sense. What are we asking a four-year-old if he has an attorney, or if he understands what's going on in this place? We move to reunite the petitioner with his parents.

Judge: Where are his parents right now, Ms. Riley?

Riley: We're not sure at this time.

When it comes to defending Hector, Easy has Assistant State Attorney Gerald Warren (Patrick Mulvey) present on his behalf to petition for the DREAMer to stay in the U.S. to stand trial. Warren, in addition to his own thoughts about deportations, has his own theory that California prosecutors created the MS-13 gang.

Easy: I have co-counsel at this hearing, your honor.

Judge: You sure you're standing at the right table, Mr. Prosecutor?

Warren: Yes, Your Honor. For the purposes of today's proceedings, I will be appearing on behalf of petitioner. We both want the petitioner to stay here and stand trial.

Judge: Petitioner's on his way back to El Salvador, Mr. Warren. Why not take the easy win?

Warren: Well, many in my shoes have, Your Honor. In fact, MS-13 as an entity was created by California prosecutors who chose to deport instead of try and punish violent aliens. I have no interest in continuing this naive and ignoble tradition.

Judge: Mr. Boudreau, your client would rather face a murder trial than hop a free plane ride home?

Easy: America is Mr. Costa's home, Your Honor. It has been since he was three years old. He was living here lawfully as a DREAMer until he was wrongfully accused of this crime. Mr. Costa views this trial as an opportunity to prove his innocence. At which time we will return to your courtroom and ask you to reinstate his DACA status.

Riley: It is always in the interest of public safety to remove violent criminals as quickly as possible.

Judge: And where is petitioner now?

Easy: Cook County Correctional Facility. And we are no longer seeking release on bond, Your Honor.

Judge: That pretty much undercuts your public safety argument, Petitioner's stay of removal is hereby granted.

Easy: See you in court.

With the season almost over, it’s hardly surprising Proven Innocent is desperate to get in on the current hot liberal topics. In addition to the main villain, Gore Bellows (Kelsey Grammer) being an old, white, rich guy, the show has also tackled issues of race, abortion, and transgender persons.