The Hill: Dem Makes Outlandish Remarks on Abortion, But 'Republicans Pounced' Is the Story 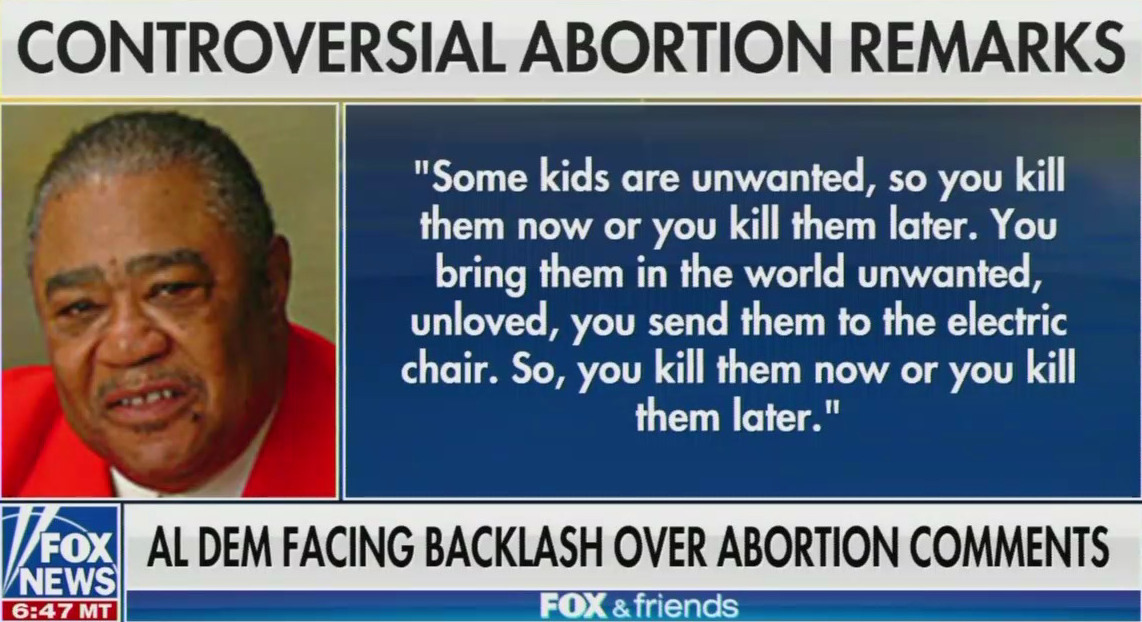 Instead, it’s conservative reaction that is the news, according to Rachel Frazin for The Hill, who writes “Conservatives seize on Alabama state Dem's abortion comments,” with a featured image of Donald Trump Jr. Her article begins by noting, “Republicans pounced Wednesday on remarks made by an Alabama state representative opposing a state bill that would criminalize abortion,” as if Rep. Rogers were casually mentioning typical talking points.

Frazin leads with less outrageous comments from Rep. Rogers, that abortion “ought to be a woman’s choice,” as if to normalize his remarks. She also fails to report on all of Rep. Rogers’ comments, including that “Some parents can’t handle a child with problems,” with Rogers referring to a child as “it,” saying that “It could be retarded.” Had he been a Republican who used such terms, one could just imagine the outrage.

There would not only be media outcry if Republicans made such offensive remarks, but every Republican lawmaker would be forced to answer for their colleague. Frazin once more focuses her reporting not so much on how fellow Democrat and Alabamian Senator Doug Jones, who hasn’t tweeted since April 30, hasn’t addressed these remarks, but on how conservatives have dared to call on Jones to respond.

“U.S. Rep. Bradley Byrne (R-Ala.) highlighted the clip to denounce Alabama Sen. Doug Jones's stance on supporting abortion. Jones has not commented on Rogers's remarks,” she wrote, without a note on whether The Hill itself had reached out to the Senator's office for comment. It would also be interesting to get a response from all the Democrats running for president.

That’s not even all from Rogers. “I may bring a bill to force all men to have vasectomies,” he also said. “That would end this whole debate. There would be no more abortions and eventually no more voters.” Forced vasectomies? How very pro-choice.

The Alabama Political Reporter, in reporting on the bill being considered, noted that “Rogers said that as a Catholic he is personally pro-life, but that the Legislature should leave options open for women.” His remarks certainly don’t sound like they’re coming from someone who is “personally pro-life.” Rep. Rogers is more honest about how abortion advocates regard unborn children and post-birth abortion.

This is not the first time the media has framed the issue around how conservatives react to the barbarism of abortion. Examples abound with regards to the Born-Alive Abortion Survivors Protection Act, which failed in the U.S. Senate. National Review reporter Alexandra DeSanctis has also created a Twitter thread to highlight examples of similar media reporting.