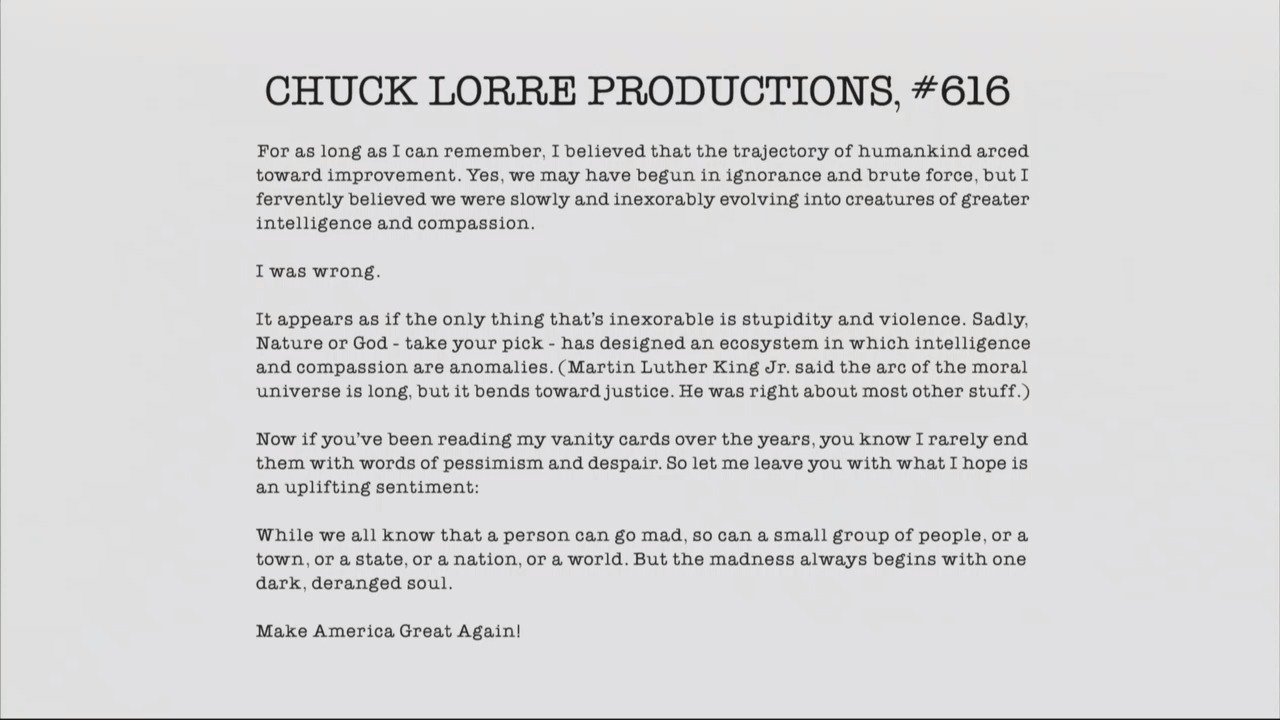 With a redacted Mueller report being released today, it's not merely the talking heads who are reacting in a bizarre fashion, it's also Hollywood, too.

At the end of April 18's The Big Bang Theory episode, "The Inspiration Depravation," creator Chuck Lorre posted the following vanity card, which seems to react to Mueller's findings with "pessimism and despair," complete with a dig at the end to "Make America Great Again!"

For as long as I can remember, I believed that the trajectory of humankind arced toward improvement. Yes, we may have begun in ignorance and brute force, but I fervently believed we were slowly and inexorably evolving into creatures of greater intelligence and compassion.

It appears as if the only thing that's inexorable is stupidity and violence. Sadly, Nature or God - take your pick - has designed an ecosystem in which intelligence and compassion are anomalies. (Martin Luther King Jr. said the arc of the moral universe is long, but it bends towards justice. He was right about most other stuff.)

Now if you've been reading my vanity cards over the years, you know I rarely end them with words of pessimism and despair. So let me leave you with what I hope is an uplifting sentiment:

While we all know that a person can go mad, so can a small group of people, or a town, or a state, or a nation, or a world. But the madness always begins with one, dark, deranged soul.

No doubt Lorre fails to realize he is outing himself as "one, dark, deranged soul" with this soliloquy. Although he placed this vanity card weeks ago, surely he knew about Barr's summary and that the full report was expected sometime this week.

Lorre has tried to be witty and creative in the past before while taking digs at President Trump, those who work for him, and Republicans as a whole. A vanity card in January about Trump meeting with a Russian was supposed to be reminiscent of the Godfather, for instance.

Some of them are downright cruel. A February vanity card made fun of White House Press Secretary Sarah Huckabee Sanders, claiming God hasn't talked to her since she was fourteen and asked him to help her get rid of acne. Apparently Lorre missed the memo that it's sexist to make fun of a woman's appearance. Either that or he gets a free pass because his target is a conservative woman who works for the Trump administration.

This is also not the first time Lorre has evoked God in his vanity cards, though mentioning Martin Luther King Jr. might be a new one. Whatever his intent, witty, hopeful, or meant to communicate "an uplifting sentiment," the vanity card just falls flat. Lorre can hope all he wants. He's not winning us over.