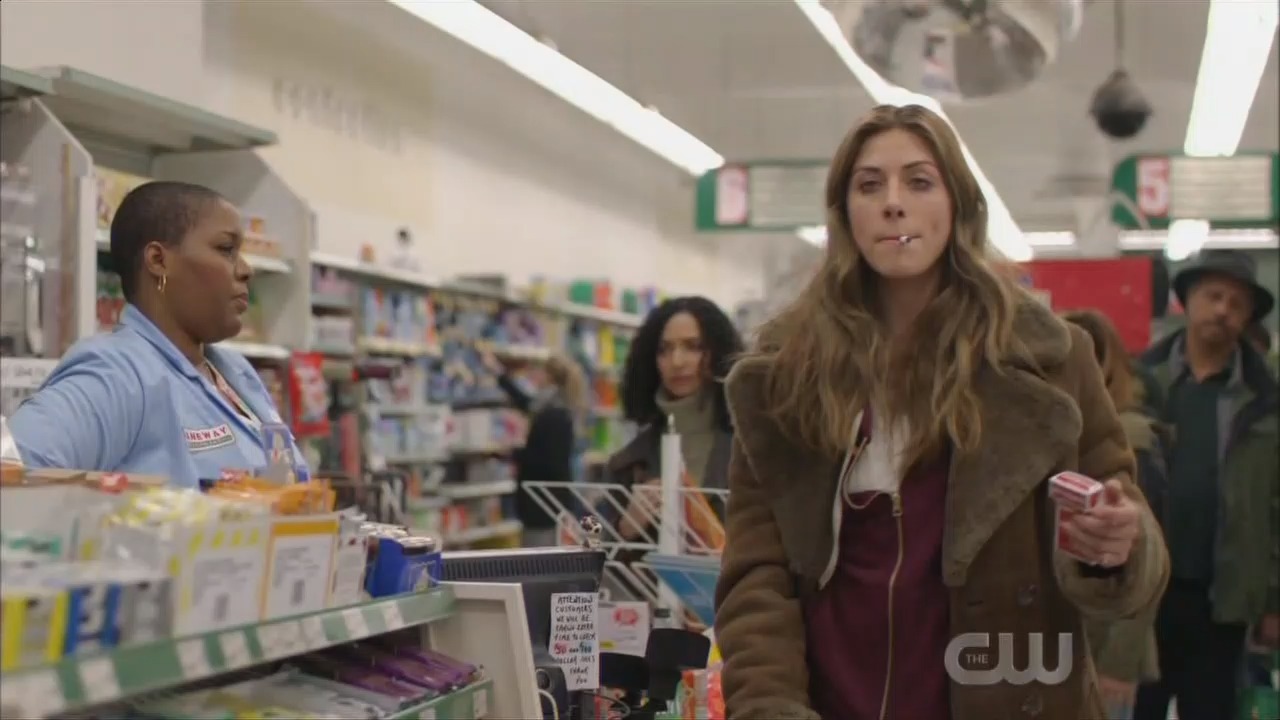 If viewers thought they would feel sympathetic towards the protagonist of CW's In the Dark, Murphy Mason (Perry Mattfeld), because she’s blind and her best friend may have died, they’re in for a surprise.

The “Pilot” April 4 episode begins with Murphy having sex with a guy she kicks out mere moments after he rolls off her. Then she heads out to buy emergency contraception, along with cigarettes and candy, which turns out to be a common routine:

Cashier: You know, you really should buy condoms, girl.

Murphy: Bad for the environment. We all got to do our part, right? You're a gem, Maria.

Murphy: I got you a stupid candy thing.

Tyson: I didn't say nothing.

Murphy: I wish I didn't like sex so much, 'cause it's a very expensive habit.

Tyson: I think I know why you do.

Tyson: It's, like, the only time that you don't have to feel blind. You know, 'cause we all do it with our eyes closed anyways.

If this sounds familiar, the same repeated Morning After Pill trope occurred in Hulu’s Shrill. Fortunately, unlike in Shrill, there’s no abortion afterwards.

The story really begins when Murphy is certain she’s discovered the dead body of Tyson, her best friend. Except, when the police arrive, they claim there's no body. So she seeks to find out the truth on her own because, as nice and thoughtful as they are, the police are, of course, effectively useless. For instance, Murphy and her roommate Jess (Brooke Markham) are able to track down Tyson’s phone by bribing a 19-year-old cell phone store employee with twenty dollars, which they end up not even paying him.

As Murphy is having a heart-to-heart with Dean (Rich Sommer), a police detective whose daughter is blind, she tells him not to do “the pitying thing” with his daughter. Murphy seems to work extra hard to ensure nobody pities her. She is miserable and often drunk. She’s also “not even nice to her own dog,” as pointed out by drug dealer, Darnell (Keston John). Tyson’s apparent death hits Murphy hard, especially with how close they are after the two met when Tyson saved her from a mugging years ago.

Another reason Murphy is likely so miserable is because of her strained relationship with her parents. The mystery boy from the opening is not the only lover Murphy is seen with. She’s about to get it on with a married man when his wife walks in. Not only does it make for an awkward situation, but it means her parents lose out on the $10,000 the couple had donated to the guide dog foundation Murphy’s parents run where she works. And by “works,” I mean she “eat[s] candy bars and take[s] naps.” Her mother is understandably beside herself, but the two seem to hug and make up on a late-night drive when Murphy reveals she got the husband to write a new, postdated check.

Perhaps the mystery surrounding her best friend will finally give Murphy a purpose and maybe even make her less unlikable. Otherwise, In the Dark will quickly be off the air.