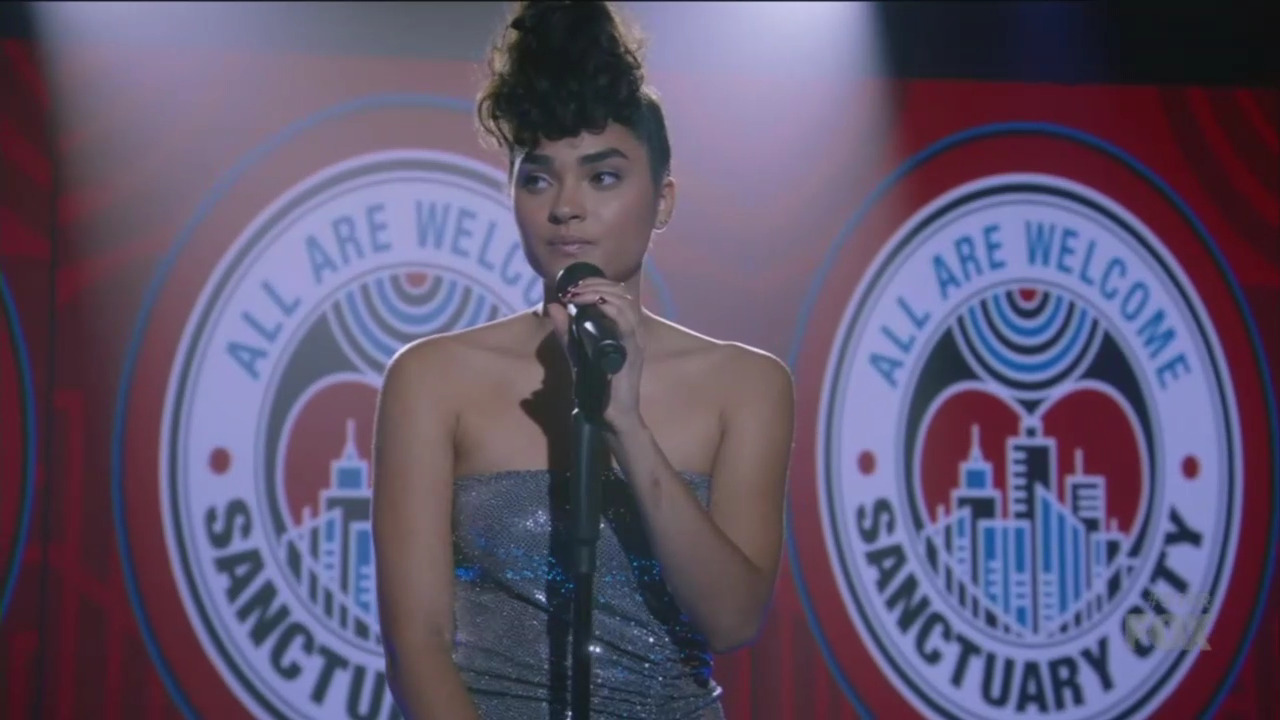 In a continuation from last week’s installment of Star on Fox, the March 20 episode, “Watch the Throne,” once more delves into the characters' fight to make Atlanta a sanctuary city so that Simone (Brittany O’Grady) can be reunited with her husband Angel (Evan Ross), an illegal immigrant who is on the run from ICE.

Simone: We are here today so Atlanta can be a safe place for immigrants. And we believe a vote can help with that. Gravity Media and Karma are partnering together to create a fundraiser to raise awareness about the issue. Councilman, we'd like you to come.

Councilman: This council appreciates all voices of the community, but honestly, I sense an ulterior motive.

Councilman: I hear you're about to film a movie.

Simone: I'm pulling away from that so I can focus on making Atlanta a sanctuary city.

Councilman: With a nightclub performance?

Simone: This issue is personal to me. My husband was deported from the only country that he's ever known, and I want action. I want to help people.

Councilman: Both sides of this issue want to help people. Half of this city is living in fear that immigrants are going to take what's theirs. The other half lives in fear that we're changing the Open Door Policy that this country was built on. Please be specific.

Mateo: The real issue is that this council has delayed a sanctuary city vote for years. It's about time.

Mateo: If we gather enough support, will you push up the vote?

Councilman: This was a waste of our time. This meeting is adjourned.

Simone: A waste of time? There’s families fighting to stay together. There’s children being ripped away from their parents. This is not a waste.

Although the Councilman was wise to note an “ulterior motive,” he stills shows up to Simone’s performance, which involves a passionate speech before she sings a song that sounds very much like a spiritual song which might be sung by slaves escaping to freedom. As Simone sings, a slideshow plays in the background with images of the American flag, the Statue of Liberty, and immigrants:

Cassandra: The bar’s doing good but not great.

Simone: Are y'all having a good time tonight for a good cause? (Cheers and applause) I'll be honest. I almost didn't make it here tonight. I felt a certain kind of way being center stage for a movement that's so important. But my sister reminded me to keep fighting. And I realized that everything I've been through in my life has prepared me for this moment. Even though I'm not an immigrant, I've lived through the pain of being separated from my family. My husband was ripped away from me and the only country he's ever known because Atlanta hasn't declared itself a sanctuary city. Let's make Atlanta a sanctuary city. (Cheers and applause)

Singing a song with lyrics such as “break away your chains” and “rather die free than live a slave” is a bold choice. And Simone afterwards confronts the Councilman to tell him they’ve apparently “rallied support fair and square,” which leads him to relent, “I’ll see what I can do,” about having the vote moved up.

The lyrics are not the only sin committed by the show, however. Those who oppose sanctuary cities are not clearly shown, and are heavily generalized as those who are “living in fear that immigrants are going to take what's theirs,” suggesting they might be bigoted against immigrants when in reality they’re more so against immigrants coming over illegally.

A subplot of the episode involves Mateo, Simone, and Derek working with an immigration activist, Lucia, who happens to be an old flame of Mateo’s from when they lived in Cuba. To Mateo and Lucia, all immigrants are the same, status be damned. Mateo and Lucia “both want the same thing. For immigrants like us to be safe in our new country, okay?” Status be damned. It’s not whether these immigrants have come over legally or not viewers ought to concern themselves with, but Lucia’s anger for Mateo “standing in their way.”

There is a big difference between legal and illegal immigrants and liberal propaganda shows like Star seek to blur that very important line.