Princeton Dresses Up a Witch for Burning

Why is the left utterly determined to make Monty Python into Nostradamus? This time, the diversity and inclusion drones at Princeton University are re-enacting the “She’s a witch!” mob from “The Holy Grail.” 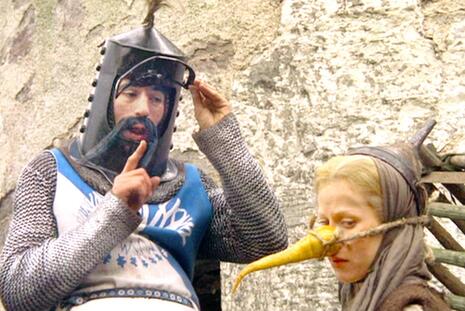 In this case, the witch is classics Professor Joshua Katz. He’s not accused of turning privileged Ivy League students into newts. It’s much worse: he publicly disagreed with nutty race-based demands from radical leftist Princeton profs in 2020. He wrote a dissenting Quillette article.

For that offense he was targeted by the university’s Orwellian race apparatus. Someone cited and quoted Katz’s article on an “officially approved university webpage headed ‘To Be Known and Heard: Systemic Racism and Princeton University,’” a mandatory orientation document for incoming students.

(Honest question: why would any black kid want to attend a school that accuses itself of “systemic racism?”)

According to an article by Stuart Taylor Jr. at Real Clear Politics, eight Princeton professors have written a letter alleging that whoever was responsible for citing Katz on the creepy website dressed him up with a pointy hat and carrot nose. Because when you set out to burn a witch, you want to make sure it looks like a witch. The passage cited is:

The Black Justice League, which was active on campus from 2014 until 2016, was a small local terrorist organization that made life miserable for the many (including the many black students) who did not agree with its members’ demands.

Not witchy enough. So the quote as it appeared on the website didn’t have the phrase “(including the many black students).” Someone, according to the eight professors, “thus removed language in which Katz ‘expressed support for black students on campus’ and objected to the BJL’s treatment of black students who disagreed with it.”

Taylor quotes the letter from the professors:

“Given that the entire purpose of the feature was to portray Katz as a racist,” the letter continued, “omitting this important language advanced this goal through flagrant dishonesty. And while the website was finally corrected last week, it had already been shown to the entire first-year class, causing immeasurable damage to Katz’s reputation.”

Yeah, a little late to admit “we did do the nose.” Besides, Katz “has got a wart” -- he bucked campus groupthink.

“At this writing, the university’s accusation of racism (with the doctored passage belatedly corrected)” is still up, Taylor says. The administration hasn’t acknowledged the eight professors’ letter and wouldn’t comment for Taylor’s article.