It makes sense that a man who wrote and sang a popular song celebrating the birth of Jesus Christ would celebrate all births. But it wasn’t always the case for Jose Feliciano, whose “Feliz Navidad” is a Christmastime staple. 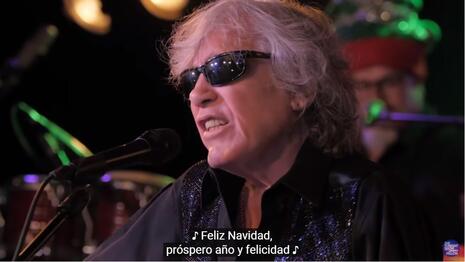 “I used to be pro-abortion, many, many years ago,” Feliciano, who was born blind, recently told the National Catholic Register. “I would have called myself pro-choice,” the 75-year-old said. “But then when I had my daughter Melissa, I went the other way … when I heard Melissa’s little heartbeat on the monitor, I said, “Well, wait a minute. Even if all there is a heartbeat, that’s life, that’s life …”

A Puerto Rico native, Feliciano had a string of hits in the 1970s with covers of “California Dreamin,’” The Doors’ “Light My Fire” and others. According to the Register, he’s “a practicing Catholic, and has performed at the Vatican and privately met with Pope Francis.”

“I’m not a protest-political singer,” Feliciano said. “Even though I have my own political views, I keep them to myself because I find that when an artist expresses his opinions, it works against him. People don’t want to hear it.”

Except for “one issue” -- abortion. Too bad more sighted people can’t see as clearly as Feliciano.