This is where the perverted fairy tale of the 1619 Project was headed all along. Nikole Hannah-Jones, who wrote the lead essay in The New York Times’s reimagining of U.S. “history” as irreparably marred by the sins of slavery and racism, is now demanding reparations for black U.S. citizens. 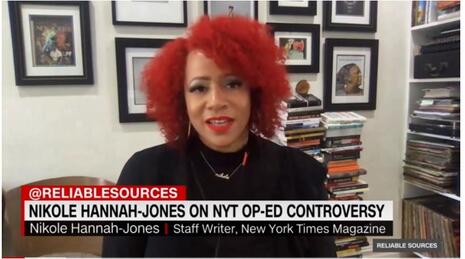 Writing in the New York Times Magazine, Jones triumphantly crows about the swift progress rioters and vandals have made in dismantling the country.

Multiracial groups of Americans have defaced or snatched down monuments to enslavers and bigots from Virginia to Philadelphia to Minneapolis and New Mexico, leading local and state politicians to locate the moral courage to realize that they indeed did have the power to purge from public spaces icons to white supremacy.

They also tore down monuments to abolitionists and suffragettes, U.S. Grant and George Washington. They deface a monument to black Union soldiers. Then there was all the looting, arson and violence.

Not that Jones seems like the type that minds a little mayhem. As The Federalist just discovered, she “penned a lengthy racist screed attacking all white people in 1995.”

Indeed. In a letter to the Notre Dame Observer, she claimed “the white race is the biggest murderer, rapist, pillager, and thief of the modern world,” and called whites “barbaric devils” whose “lasting monument was the destruction and enslavement of two races of people.”

Possibly more disturbing is Jones’s weird historical assertions. According to The Federalist she “claims Africans arrived in North America long before Europeans, but that unlike Europeans, Africans befriended and traded with the indigenous people. She claims pyramids in Mexico are a symbol of said friendship.”

This is who the New York Times entrusts with the reframing of our history?

A lot of Jones’s Times Magazine article recounts America’s myriad sins against black people and how the government has opened its coffers to help other groups. It’s all the old arguments for reparations. None of them explain why the grandchildren of, say, dirt-poor Irish farmers who immigrated to New York in the 1920s should be on the hook for slavery.

“If black lives are to truly matter in America,” she argues, “this nation must move beyond slogans and symbolism,” into cold hard cash.

“Citizens don’t inherit just the glory of their nation, but its wrongs too. A truly great country does not ignore or excuse its sins. It confronts them and then works to make them right.” but if the mob Hannah-Jones is so proud of has its way, there won’t be any glory left. And a massively destructive civil war with 600,000 dead seems an awful lot like a nation confronting its sins. Not to mention the hard work of people, black and white, in the ensuing century and a half.

Very inspiring. If we are to be redeemed, you need to pay me.