NBC Site: Heterosexuality ‘Just Not Working,’ But Miley Cyrus Has the Answer 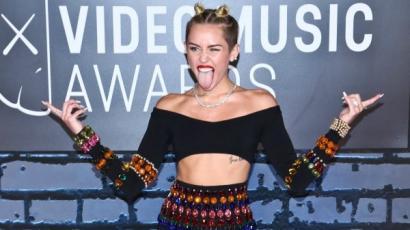 Miley Cyrus is “at the vanguard of feminist thought.” Pity feminism.

Cyrus is, of course, a pop tart who was once Disney’s Hannah Montana, after which she became one of the more crass libertines in an entertainment culture overpopulated with them. She recently split from her husband of three weeks (or whatever). It was surely a blow to romantics everywhere, but not Marcie Bianco, lesbian feminist who writes for NBC’s distinctly unthoughtful Think site.

Bianco’s August 16 piece celebrated Cyrus and actress Julianne Hough for making public announcements “about sexuality in ways that puts the power — and responsibility — back into their own hands.”

In other words, they dig chicks. Not exclusively, mind you, but enough to make Bianco hold them up as examples of women “taking back control of their lives and their bodies and they are questioning the foundation of the patriarchy [Boo! Hiss!] — heterosexuality — that has kept them blindly subordinate for centuries.”

Seems like an awful lot of importance to place on the preferences of two unrepresentative entertainers. But, given Bianco’s view of traditional sexual arrangements, you can see why she imagines the Just Empire of Amazon Warrior Women is in the offing.

Bianco sees “the strictures of an American patriarchy [Boo! Hiss!] on the edge of a nervous breakdown. As the status quo, heterosexuality is just not working.” This is troubling. I’ll have to ask my wife about it.

“The picture,” she said, “is this: Men need heterosexuality to maintain their societal dominance over women. Women, on the other hand, are increasingly realizing not only that they don’t need heterosexuality, but that it also is often the bedrock of their global oppression.”

But what of women who don’t feel oppressed? Hah! Bianco has you there:

Patriarchy is at its most potent when oppression doesn’t feel like oppression, or when it is packaged in terms of biology, religion or basic social needs like security comfort, acceptance and success. Heterosexuality offers women all these things as selling points to their consensual subjection.

This is a warmed over marxist trope, of course. You suffer from false consciousness, Comrade Lady Girl. You don’t realize how unhappy you are. Reeducation will open your eyes to the exploitation of the capitalist, er, patriarchal oppressors.

Revolution is coming, and Cyrus and Hough are its intellectual trailblazers. Their “respective declarations does [sic] more than raise visibility for the queer community at large — it is a powerful assertion of their bodily autonomy and control over their sexuality.”

And sexual freedom is, after all, the most important thing in the world to today's feminist. As Bianco, notes, it’s “a far cry from the type of freedom espoused by those on the right, for whom freedom, as I wrote in an earlier article on how misogyny is the driver of mass shootings in America, is conflated with domination. [She did write that article. It was just as delightful and fun as this one.] In this context, freedom is actually possessed by a select few, as it is dependent upon the oppression — rather than the liberation — of disempowered people, particularly women and minorities.”

Huh. And you thought you just wanted to be left the hell alone. Well, too bad patriarchal swine, because, in the words of Marcie Bianco, Warrior Princess: "While men stew in their mess, women are rising …”