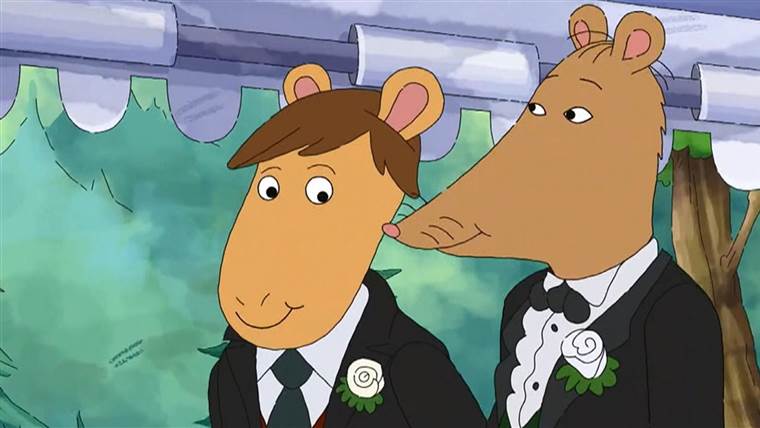 Oh, Alabama. Tsk, tsk. You already provoked the attention of Perpetual Outrage, Inc.™ by trying to make your state safe for the unborn. But your willingness allow parents to raise the kids they do have without the guidance of federally funded gay propaganda is really too much. This disdain for progressive pieties will not stand.

Alabama Public Television took a pass on broadcasting an episode of PBS’s kids cartoon Arthur, because it focused (super-approvingly, of course) on a gay wedding. The BBC reports that “APT Programming director Mike McKenzie said broadcasting it would break parents' trust in the network.”

This McKenzie -- obviously a hate-riddled reactionary -- explained “‘parents trust that their children can watch APT without their supervision,’ and that children ‘younger than the 'target' audience’ might watch without parental knowledge.”

And trust is at the heart of the matter. If hicks in Alabama and Georgia insist on carrying their brats to term, how can they be trusted to raise them? They might drag them to church on Sundays. Fare like Arthur is supposed to counterbalance the ignorance.

The lefty Twitter mob is predictably enraged -- they pay good money for PBS (we all do, whether he have the tote bag or not) and they expect it to penetrate the trailer parks of the deep South. The blue checkmark set’s been making with the hillbilly jokes, like: 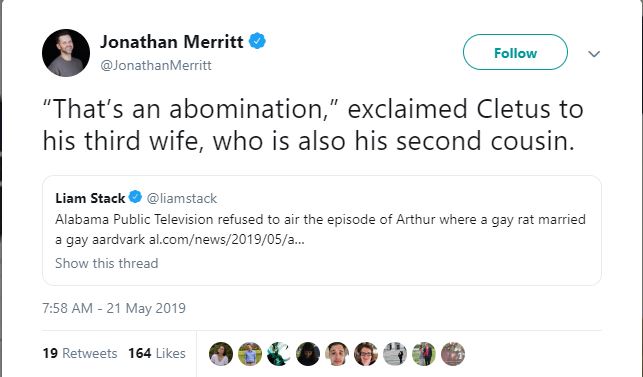 Nice guy, huh? But disappointment is bitter. When PBS announced an upcoming episode would feature the character of Mr. Ratburn marrying a guy, The Huffington Post and liberals on Twitter crowed with the the kind of excitement that only lefties could exhibit for gay rats on public television.

The BBC says, “Arthur is a joint Canadian/American series which debuted in 1996 about an eight-year-old anthropomorphic aardvark named Arthur Read and his friends, who live in the fictional Elwood City.”

Hear that? Canada’s behind this, just like it is that other PBS testosterone-sapper, Caillou. Yeah, a whole cartoon about raising Justin Trudeau. Remember the one with with the bilingual, wheelchair-basketball-playing dragons? Same deal. (It’s a plot to emasculate the U.S. and impose Canadian cultural hegemony on us. How much Rush can you listen to?)

We can probably expect that APT will relent and McKenzie will apologize. He miscalculated. He tried to serve his friends and neighbors in Alabama, but it was the folk in D.C. and Ottawa -- and on Twitter -- he should have been looking out for.