Note: Reading about stuff liberals care about may trigger revulsion, pity or uncontrollable laughter. If any of those feelings last for more than four hours, consult your doctor.

“I put on women’s clothing, and hang around in bars …” -- The Lumberjack Song by Monty Python
If only it were still that easy! Drag queen RuPaul has a show called Drag Race, in which drag queens compete doing drag queen things; the winner, assumedly, being the drag queeniest. But what if the winner has a little extra help? As Caroline Framke explains in Vox, RuPaul’s answer left him facing some very cross crossdressers. 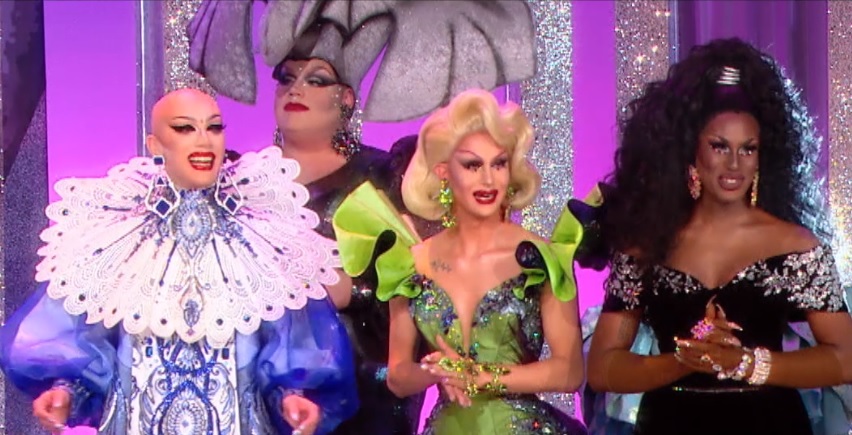 According to Framke, RuPaul was giving an interview to The Guardian when he said “he ‘probably’ wouldn’t have admitted a transgender woman like Peppermint — an iconic New York City performer who made the finals in season nine after coming out as trans on the show — if she had already started gender-affirming surgery.”

To put that in Academy Awards terms, “No Peter No Oscar.”

So RuPaul said a competition for men in women’s clothes is no place for a man in a woman’s body. He explained,“drag loses its sense of danger and its sense of irony once it’s not men doing it.” Besides, Drag Race is the pinnacle, the Masters of mugging, the World Cup of camp -- they play the game right at this level. As RuPaul subsequently tweeted, “You can take performance enhancing drugs and still be an athlete, just not in the Olympics.”

That didn’t go over well. The Trans community wigged out. Peppermint schnapped that “women should not be defined by what surgeries they have or haven’t had” and that “gay men do not own the idea of gender performance.”

Framke wrote, “The RuPaul’s Drag Race fan community is no stranger to drama.” Ya don’t say. But Paul has run afoul of a group that takes itself far more seriously than he takes himself, as he learned in 2012 when he defended using the word “tranny.” He’s even been castigated for saying “‘You’ve got she-mail!’ a play on a particularly vicious derogatory term for transgender women.” Or maybe just a funny thing to say to a roomful of fellow dudes dressing up as girls?

Framke noted RuPaul’s heart was in the right place. He told the Guardian drag was “‘a big f-you to male-dominated culture” and a “real rejection of masculinity.’ But he did so by framing it within his opinion that and ended up dismissing all that trans women, trans men, cis women, and nonbinary people have contributed to the complex, beautifully weird world of drag.”

Just how complex is that world? Framke again:

For Jinkx Monsoon, who came out as nonbinary shortly after winning Drag Race’s fifth season, “drag is the way that I express myself in a safe way, and drag is also the way that I’m able to express myself day to day.” Trans queen Daphne Always described a similar feeling to Mic, saying that developing her drag persona was a way for her to “look closer to what I’ve always looked like in my head.” Peppermint, meanwhile, has found that her “everyday approach to drag versus trans is probably similar to the approach of a cis woman who is a showgirl.”

Ru, apparently, has some catching up to do. If that doesn’t do the trick, he could always become a lumberjack.

Lipstick on a Super-Pig: “Okja, a heart-wrenchingly effective piece of vegetarian propaganda, follows a determined young girl as she fearlessly travels around the world in an effort to save Okja—the super-pig she grew up with—from being murdered in a mass slaughterhouse.” -- 9 Feminist Films from Around the World on Netflix by Broadly.

Four men and Greta Gerwig walk into an awards show … Advice for awards show participants: If your off-the-cuff virtue signaling can’t include absolutely everybody’s complaint, just smile and read the prompter. That’s the lesson poor Emma Stone learned from her Oscars appearance. Stone’s failure to be sufficiently intersectional must have about everyone in the business shuddering at the backlash and thinking, “There but for the grace of Gaia go I.” 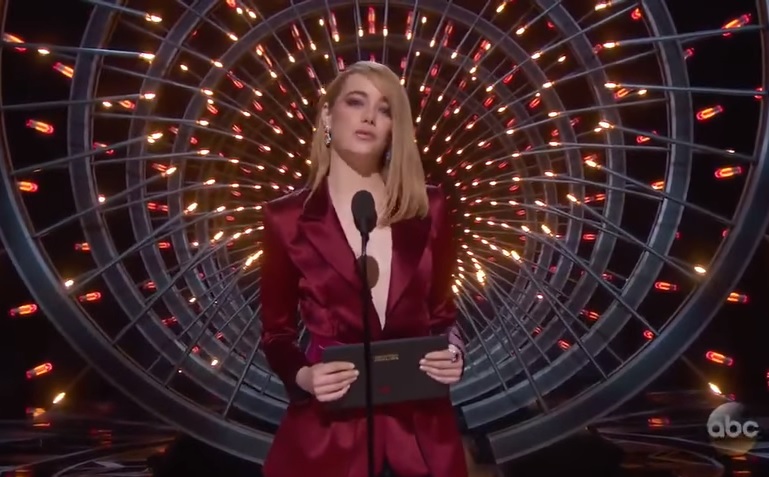 While presenting the Oscar for Best Director, Stone said, “These four men, and Greta Gerwig, created their own masterpieces this year.” That was a clever dig. (Clever is relative -- we’re talking celebrities here.) But as the Daily Mail explained, “Stone’s jab about gender disparity in Hollywood missed the mark because it dismissed the accomplishments of [gasp!] two men of color.” That is, Jordan Peele and Guillermo del Toro.

You, dear normal person, may say, “So what? She’s a feminist, committed to resisting the dominant patriarchal power structure and overturning society’s artificial phalo-centric narrative.” (Well, okay, you wouldn’t say that, but you’d probably excuse her for getting in her personal girl-power gripe in the time allowed.) Was Stone obligated to give a grievance shout-out to a black guy and a Mexican-American? According to the commissars of liberal Twitter, you better believe she was.

“Gerwig is only the 5th white woman to be nominated but Jordan Peele is only the 5th black man,” one observer tweeted. “How many Mexican directors are nominated?” Umm, not many? I lent out my Almanac of Hispanic Entertainment Awards during the Golden Globes and it hasn't been returned.

Others reminded Twitter that Stone “played a whitewashed character in Aloha,” a Woody Allen flick. White girl Stone played an Asian character. Note, of course, that Stone’s being pilloried for that “whitewashing” sin, not for working with the auteur and noted young girl-enthusiast -- #Metoo is so last week.

Another tutted, “I understand what #EmmaStone was trying to illustrated last night but to shun an African American, and Mexican immigrant, directors who also are underrepresented is just classless and disrespectful.”

The criticism must be hard for the exquisitely “woke” Stone, who’s a Planned Parenthood pal, an Everytown gun grabber and besties with soon-to-be savior of our “democracy” Jennifer Lawrence. But it gets worse. There’s actually a name for her offense.

Some accused Emma of “'white feminism,” a brand of feminism that focuses on the ideal and struggles of white women while failing to address the oppression of ethnic minorities. “Peak white feminism from Emma Stone,” Nik Reed tweeted. “Pointing out that 4 of the nominees are men while ignoring that 2 of those men are minorities.”

There’s nothing sadder than a virtue signal gone awry, but Stone deserves everything she gets. What with families, regular jobs and mortgages, most normal people don’t care who’s up or down in the Great Victimhood Sweepstakes and don’t (yet) have to fear the Twitter Bolsheviks. But a Hollywood progressive like Stone has no excuse.

Up with this I will not put. While we’re on the Oscars, let’s appreciate Gary Oldman for a moment. I don’t know the man’s politics and never much cared to -- he’s a great actor and that’s all you need know. But he said two things while accepting a well-deserved Best Actor that are worth noting (which is saying something for the Oscars). First, the English native had the bad taste to thank America: "I’ve lived in America for the longest time and I’m deeply grateful to her for the loves and the friendships I have made and the many wonderful gifts it has given me: my home, my livelihood, my family, and now Oscar." 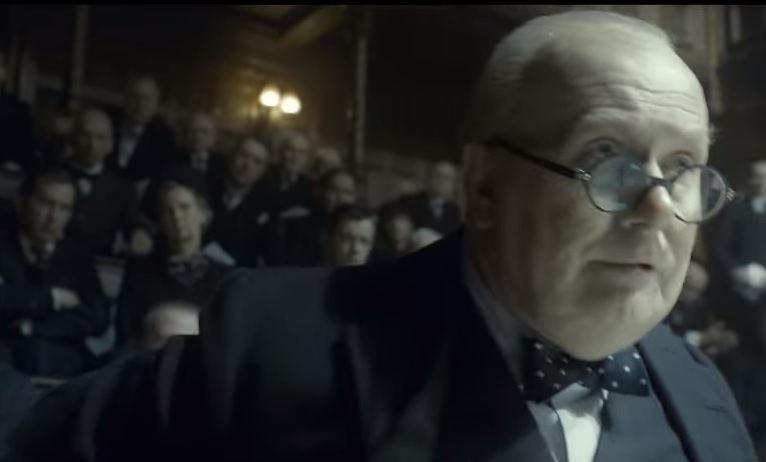 Given the embarrassed silence that followed, he may as well have been reminiscing about holding casting calls Harvey Weinstein. Think of that next time Meryl Streep holds forth on who the real Americans are. Ironically, he’d been handed the award by the mummified remains of “Hanoi” Jane Fonda, who didn’t seem to be smiling -- though who knows if she can anymore. (I kid, I kid! She looks amazing for an 80-year-old. So did Dorian Gray.)

Second, Oldman thanked the man he played in Darkest Hour. Winston Churchill as “marvelous company on what can be described as an incredible journey.” The audience barely registered it, but from the reaction on lefty Twitter, you’d have thought Oldman had put on his Churchill voice and said to Emma Stone, “Hold my whiskey.” The scorched earth revisionists, victim fetishists and anti-Western Civilization warriors came out in force.

Another tweeter wrote that Churchill was a “racist right wing imperialist, despised foreigners and working class and was actually tactically incompetent in WW2.”

There were many more, none worth repeating. Churchill is inconvenient to lefties for a lot of reasons. If you’re invested in the idea that Western Civilization is inherently evil, you’re not going to revere the guy that rescued it. But Churchill, at times alone, recognized and fought the almost unimaginable evil of the Nazis (the real ones who annihilated whole villages and gassed undesirables by the millions, not the church-goers or free-market campus speakers that give today’s lefties the vapors). Later, he would among the first to recognize the evil of Soviet Communism.

The revisionists and character assassins have always been stymied by the facts about the man himself. Churchill was no saint. He was impetuous, vain, arrogant and selfish. He was a man of his time and class -- a defender of imperialism and by modern standards a bigot. He, as a statesman governing in horrible years, had to make horrible choices. He was ruthless at times.

Yet he was no demon, either. He was fundamentally decent and humane, and was repulsed by all forms of totalitarianism.

Nor was he a doctrinaire right-winger.Churchill spent a good chunk of his early political career in the Liberal party, where he “championed old age pensions, prison reform, unemployment insurance, public health care, and reform (if not elimination) of the House of Lords.” He also negotiated the end the Irish War of Independence, which created the Irish Free State.

Besides, he did more cool things than just about anybody. Other bits of the Churchill resume: