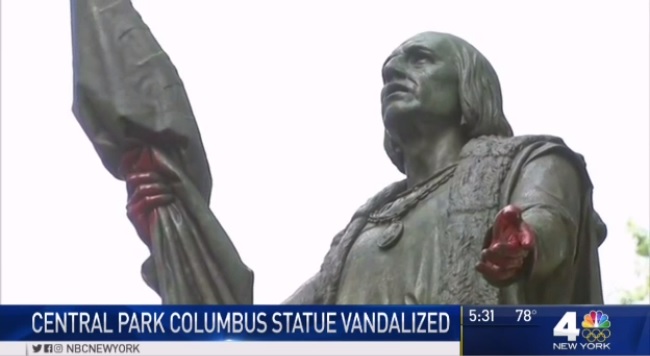 Christopher Columbus is the latest victim of the Maoist left’s new Cultural Revolution – the effort to erase American history. Just in the past month, Columbus monuments have been vandalized in Central Park, Yonkers, Astoria in New York City; Binghamton and Buffalo in New York State; along with Baltimore and Houston.

Strangely, ABC, CBS and NBC news programs have yet to spot the trend – or at least their national news shows have. All three ran stories about the latest outrage on September 11 on their websites, and local New York news affiliates covered the story.

It isn’t as if the damage were the result of random hooliganism. In Central Park, the vandals spray-painted “Hate will not be tolerated” and, rather ominously, “#somethingscoming” on the base of the 125-year-old statue. The Baltimore Taliban wannabes helpfully explained their reasoning (for lack of a better word) on a video of their crime, and included signs reading “Racism: Tear it Down” and “The Future is Racial and Economic Justice.”

The networks’ silence is also odd given that there are ongoing formal and semiformal efforts to erase from the public memory Columbus and anyone not magically “woke” in their own centuries to current progressive pieties. The Buffalo vandalism coincided with a change.org petition drive to demand the city remove the memorial. “Columbus established the beachhead for ruthless conquest and settler colonialism and inaugurated the genocidal devastation of whole continents,” he petition declared.

Meanwhile, in New York City, Mayor Bill “Sandinista” de Blasio has established a committee of reliable left-wingers (including the charming Harry Belafonte, who once called Colin Powell and Condoleeza Rice house slaves and called for Obama’s opponents to be jailed.) to vet ideologically suspect monuments and statues within the Five Burroughs.

To get the committee started liberal tabloid The Daily News offered a list of 24 offending monuments, ranging from George Washington (he owned slaves) to Henry Ward Beecher (he tried to free slaves, but he had an extramarital affair). Other malefactors: General Winfield Scott Hancock, hero of Gettysburg, and some other military men fought Indians before and after the Civil War. General Daniel Butterfield took a bribe and resigned from the Grant administration. But in 1918, New Yorkers, not yet blessed with the moral guidance of The Daily News, apparently thought Butterfield’s Civil War Medal of Honor merited him a statue. General Horace Porter may have kinda been involved in some Grant administration scandals but “was never charged with wrongdoing,” according to The Daily News.

On a list such as this, Christopher Columbus is bound to fare poorly, and The Daily News doesn’t disappoint:

One of the first European explorers to reach North America, landing in Hispaniola (Now Haiti/Dominican Republic) in 1492. He immediately claimed the new world as the possession of the king and queen of Spain and began capturing and enslaving the indigenous tribes already living in what would later be called America.

That’s it. Nothing about the audacity Columbus displayed, the risks and hardships he and his crews faced, their industry and vision, or the fact that, as the plaque The Daily News sneers at says, “But for Columbus There Would Be No America.”

It would be helpful if the networks would let viewers in on the left’s intended desolation of American history. Warts and all, it’s a great story – one that doesn’t deserve to disappear down the PC memory hole.