Comrades! We must get to Havana before the counter-revolutionary Yanqui influence corrupts the Workers’ Paradise! So says far-left moonbat mag The Nation (though in not so many words) in an email inviting readers to join it in Havana this spring.

Cleverly addressed to “Fellow Cuba Traveler,” (Heh, a little commie humor there – sure our ideology has killed hundreds of millions, but we have fun!) the e-mail promises a trip that will immerse discerning lefties in myriad government propaganda opportunities. For just $5,855 per person (double occupancy) – which it would take the average happy, proud member of the Cuban proletariat 26 years to earn – you get an unadulterated dose of Fidel and Raul’s Cuba! 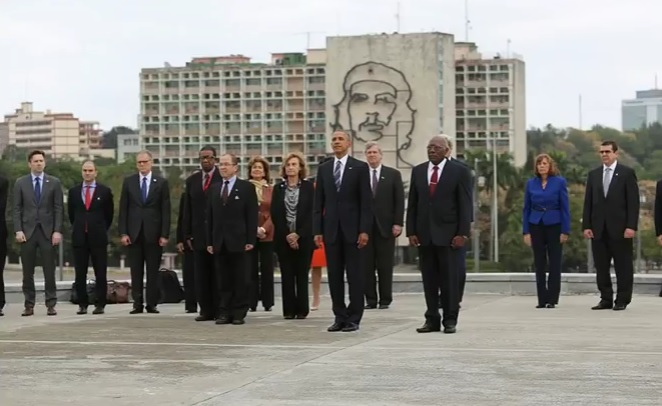 During our time there, we will immerse ourselves in the beauty and energy of Havana, spending our days meeting with prominent Cuban professors, government officials, physicians, community activists, farmers, urban planners, journalists, and artists. Our evenings will be filled with exclusive concerts by renowned musicians, private showings at artists’ studios, and performances by students of Cuba’s internationally acclaimed dance institutes.

Wow! Yes, you’ll be tearing through the Potemkin façades of Havana like Ted Kennedy through a Third World brothel. But don’t worry, there’s time to “wander though the markets of Old Havana” (perhaps imagining what they’d be like with products for sale) and “explore organic farms and savor traditional Cuban food and spirits.” Hint: try the rum.

Doubtless they’ll show off the prison yard where Che Guevera savored hundreds of executions, and the email promises other captivating activities and events. Who knows, maybe you’ll get a glimpse of the tropical gulag that’s the envy of totalitarian murderers everywhere!

And, because it can be difficult even for veteran Western leftists to understand totalitarian fantasy speak you’ll be accompanied by Peter Kornbluh, a Nation contributor and your very own pointy-headed commie-symp university type! Bet he can say “don’t believe your eyes” in at least three languages! “These trips are important to educate ourselves to the realities of Cuba” Korbluh explained, “for preserving our right to travel, and for effectively engaging in the coming debate over Cuba policy.” Yes, because lefty ideas about policy have worked out so well for Cuba in the past.