The third “Purge” movie will continue its tradition of using American imagery to bash America and its values.

The trailer for the politically charged dystopian thriller was released on Monday and featured creepy, clownish murderers wearing American flag and colonial paraphernalia as “God Bless America” played in the background. 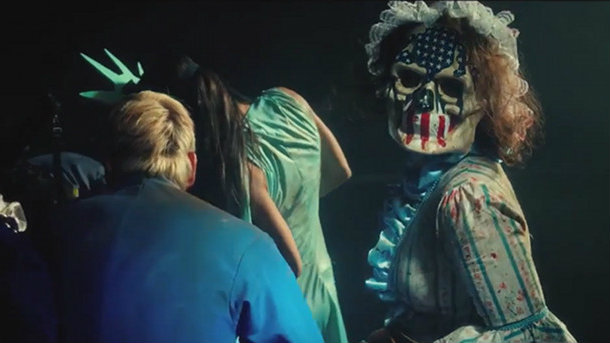 The story revolves around a female U.S. senator (Elizabeth Mitchell) who speaks out against “purge night,” a night where crime is legal for 12 hours to rid America of all its violence but in reality decimates the poor and luckless.

Purge night was started by the party in power, the Tea Party-like New Founders of America (NFA), who believe in God and support guns and the military draft. The senator is not surprisingly targeted on purge night by a table of old white men, apparently part of the NFA. A betrayal sends her fleeing with her protector, Leo Barnes (Frank Grillo), who helped save a group of people from purge night in the first movie.

This spectre is what writer/director James DeMonaco envisions would happen if too much patriotism gets unruly because, you know, those July 4th parades always have the edge of barely controlled violence.

Back when the first installment was released DeMonaco told Screenrant that the movie had a specifically anti-conservative political agenda.

“I layered in these New Founding Fathers, this regime that we voted into power at some point, some kind of NRA-thing that took over the country,” he said.

“I did want to say something on class,” he added. “I think that was always the intent, to play at this apathy of the rich. It’s a morality tale.” One might wonder what exactly is DeMonaco's system of morality that trashes his country and religion?

The new trailer also shows images of a Christian church having a violent purging sacrificial ceremony.

“Purge” appropriates the symbols of America to bash not only American ideals but Christianity, the biggest religious demographic in America. Perhaps some of the patriotism being trashed and misrepresented in the film will speak up to critique it.