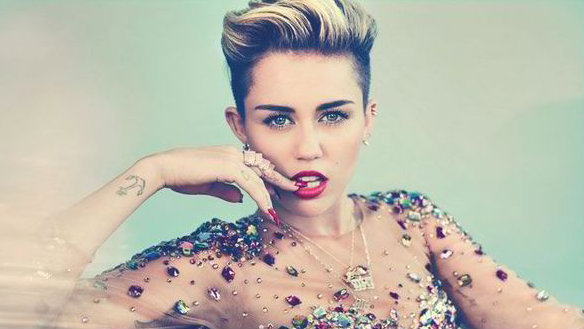 Get ‘em while they last! For only $50, shoppers on Marc Jacobs’ website can buy a T-shirt featuring Miley Cyrus and give money to Planned Parenthood at the same time.

On Monday, Teen Vogue reported that the actress and singer, known for her wild antics and ‘twerking,’ has decided to use her fame for a cause she believes in: access to so-called “reproductive healthcare,” such as abortion.

The T-shirt, called “Miley Hearts Planned Parenthood,” is the result of a collaboration between Cyrus and photographer Marilyn Minter, recipient of Planned Parenthood’s Woman of Valor award. The risqué design features Miley behind a steamy pane of glass with the words “pro-choice” traced in the fog.

The photos on the t-shirts are the outtakes from that photoshoot that produced a $5,500 print sold at Planned Parenthood’s annual spring luncheon.

And they aren’t stopping there. Miley and Minter alluded to even bigger plans for the future. Minter told a reporter that “we have a secret plan” to be unveiled in June, when SCOTUS decides the Whole Woman’s Health V. Hellerstedt case on abortion restrictions in Texas.

This isn’t the only social issue Cyrus preoccupies herself with. Just last year, she founded the Happy Hippie Foundation for LGBTQ youth and launched an #InstaPride campaign for the transgender movement.

But now, she has added a federally funded abortion organization to her list of “needy causes.”

Joan Malin, CEO of Planned Parenthood of New York, gushed over the support from “Marc, Miley, and Marilyn.” She, together with Planned Parenthood, couldn’t wait “to have the opportunity to wear their support on their sleeves, literally.”

Because the sale of the naked female body is an excellent way to “support” women (women already born, that is). Cyrus is probably too busy swinging on wrecking balls to catch the irony.