In Emma Watson’s interview with Margaret Atwood, Atwood revealed she believes the dystopian world of The Handmaid’s Tale could actually become reality on account of “right wing power.”

Entertainment Weekly published Emma Watson’s interview with Margaret Atwood July 14, after yet another absurd ‘Handmaids’-inspired protest. In the name of so-called “reproductive rights,” protesters wearing red capes and white bonnets gathered in Chicago to urge Gov. Rauner to pass HB40. The bill would expand abortion access. Unsurprisingly, Planned Parenthood sponsored the protest, along with the ACLU. 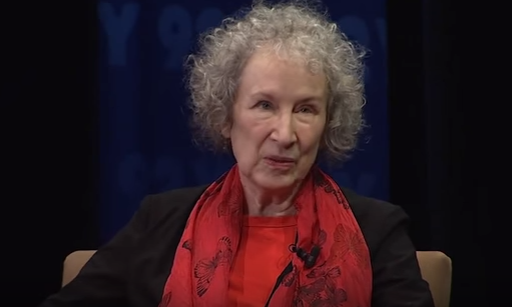 Atwood has been remarkably supportive of protesters donning the costumes of her novel for political purposes. Atwood also loves Planned Parenthood, as her tweets and hashtags regularly reveal. And her interview with Emma Watson revealed as much, as well.

“You’ve probably seen that women dressed as Handmaids have been turning up in state legislatures and just sitting there. You can’t kick them out because they’re not making a disturbance.” Perhaps Atwood overlooked certain protests in which Handmaids shouted “Shame!” at GOP candidates and carried signs declaring “Abort Mike Pence!”

Atwood stated “what right wing people were already saying in 1980,” just seven years after abortion became nationally legal, was a primary “inspiration” for The Handmaid’s Tale.

I believe that people who say those kinds of things will do those things if and when they get power: They’re not just funning around…If you’re going to make women go back into the home, how are you going to do that? If America were to become a totalitarian state, what would that state look like? What would its aims be? What sort of excuse would it use for its atrocities? …It would not be Communism in the United States; it would have undoubtedly been some sort of religious ideology – which it now is.

Margaret Atwood could not have demonstrated greater ignorance of the reason religious conservatives oppose policies like abortion – and that opposition has nothing to do with the disgusting misogyny of The Handmaid’s Tale. The truth is simple: they oppose it because abortion has killed nearly 60 million human beings.

Atwood lamented the “theocracy” of Puritan settlements in New England, as well as the fact that Harvard began as a theological seminary which “excluded anybody who didn’t believe in their theology.” Yes, hundreds of years ago. Has she checked Harvard lately? In 2008, faculty donated to Barak Obama over John McCain at a ratio of 20 to 1. Harvard’s student newspaper Harvard Crimson revealed 96 percent of University’s slew of academics donated to Democratic candidates over Republican candidates. And Harvard is emblematic of higher education’s intellectual homogeneity.

Atwood noted “how easy it is and would be to control huge groups of people with the amount of data that’s been collected.” Perhaps she should apply this ‘data’ to the groupthink attitudes that pervade left-wing media, academia, and pop culture – attitudes she has, evidently, espoused.