GLOW, the Netflix show about a real, all-female wrestling team, has received both praise and criticism for an abortion scene in its eighth episode. Actress Alison Brie plays one of the wrestlers, Ruth Wilder – who chooses to undergo an abortion.

While Refinery 29 declared Wilder “did what she needed to do,” The Federalist stated the abortion scene “misleads women” with an “unrealistic depiction” of real, abortion procedures.

Alison Brie, herself, soon joined the discussion on the abortion scene in an interview with The Hollywood Reporter July 3.

“Women should be able to make that choice, and it doesn’t have to be the end of the world,” Brie told The Hollywood Reporter. She continued:

“It made so much sense to me when I read the script … I responded to it immediately. That’s how I would react if I were Ruth, and I didn’t question it at all…It’s really important, especially right now, to highlight that women should be able to make that choice and that it doesn’t have to be the end of the world,” says Brie. “What I especially love about that episode is that it’s a very easy choice for Ruth to make, whether or not the emotional repercussions will continue throughout her life. They might or they might not. This is a show about women’s bodies and about them taking control of their own bodies, and that's highlighted beautifully in that episode.”

The Hollywood Reporter noted that GLOW co-creators Liz Flahive and Carly Mensch declared Wilder’s decision a ‘realistic one,’ and that they “were telling honest stories about things that women go through,” that it was “a very relatable and normal story for certain types of women.”

On June 24, Alison Brie tweeted her support for Planned Parenthood: 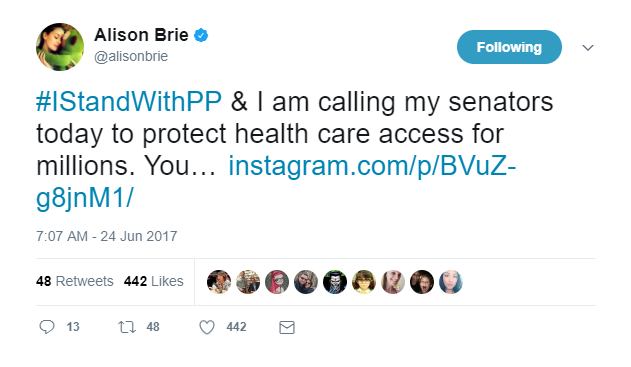 The show’s creators claimed inclusion of an abortion scene in the storyline was simply an “organic” idea, that they “didn’t have some macro-intention to expose this somewhere in the season.” Yet it’s certainly clear at least one member of the GLOW cast is pushing a pro-abortion agenda.