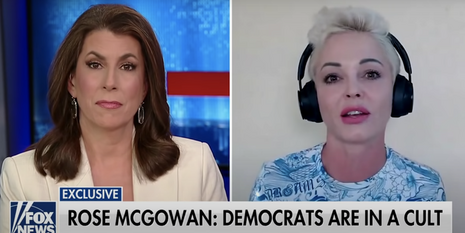 Former actor/activist Rose McGowan has been making waves attacking people on the Left nowadays, but her latest move is proving to be a political tidal wave. Nothing can shock the cult-like left more than one of their own going to Fox News.

On April 26, McGowan made her first Fox appearance to speak with Fox News Primetime host Tammy Bruce to discuss the left. Although the two disagree on plenty of issues, the actress was willing to discuss what she found were massive shortcomings of the Democrats and their “cult” mentality:

"I am not here to make people feel bad about their political choices. But I am here to say that you might be in a cult too if you don’t know the signs. And I do believe Democrats, most especially, are in a deep cult that they really don’t know about and aren’t really aware of.”

In addition to calling the Democrats a cult, she calls out the party for essentially having a “misguided” perspective when it comes to actually helping people.

"I find the Democrats are really, pretty much almost against all the same things. They’re against changing the world for the better and they’re for keeping a system in place that is for so few people and benefits so few but they masquerade as the helpers."

Predictably, this led to the usual backlash on Twitter for anyone daring to stray from the Democrat talking points, including perpetually outraged Democrat Keith Olbermann. Of course, this inadvertently proves McGowan’s point about cult-like behaviors, but that never stopped the mob before and it's not starting now.

To her defense, McGowan does not refer to herself as a Republican and even calls out the right-wing party as cultish too. She mostly advocates distancing oneself from political labels to analyze personal beliefs. In fact, she responded to the inevitable backlash by saying as much in two videos on her Twitter account.

Yes, I, Rose McGowan, was on Fox News. Here’s why (video 1) pic.twitter.com/rt9Vm9oHaG

Rose McGowan is clearly not going to be speaking at a Republican National Convention anytime soon, but her willingness to call out the polarizing Democrats in charge will certainly win her some moderate support. Even some conservatives should care to take notice.