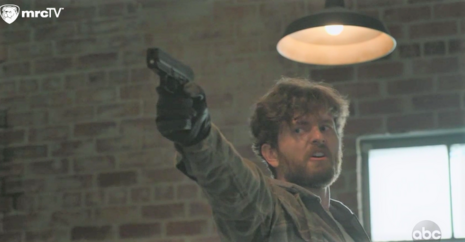 ABC’s For Life clearly wants to go out with a bang rather than whimper with its season finale. After straight up rewriting the Jacob Blake case a few weeks back, the legal drama is back to further demonize the police as racist and police supporters as violent.

The February 24 finale “Andy Josiah” concludes the plot of convict-turned-lawyer Aaron (Nicholas Pinnock) prosecuting the police for shooting Jacob Blake stand-in Andy Josiah (Royce Johnson). Like most police shooting cases, it quickly turns political. And by that, I mean, the police are all painted as either racist and corrupt or okay with corrupt racists.

Over the course of the past three episodes, we’ve learned that officers have changed their story, intimidated witnesses into silence, and likely vandalized Aaron’s house with “Blue Lives Matter” spray painted. Although Aaron and his team find an officer to testify for them, “conservative groups,” as the episode says, still work against him, leading to this violent confrontation where a man shouting "Blue Lives Matter" shoots at them.

Aaron: Call an ambulance! He's been shot! He's bleeding bad! We need something to wrap it! Charlotte, get some towels!

Henry: Are you all right?

No word about the lives lost and billions in damage caused by Black Lives Matter riots. Instead, the show has to make up white Blue Lives Matter supporters literally shooting their enemies. Fortunately, Henry (Timothy Busfield) survives the encounter, but the point is clear: side against Black Lives Matter, and you side with racist shooters.

For what it’s worth, the defense attorney, who happens to be a black woman, genuinely gives her client the benefit of the doubt. However, even that quickly devolves into more lies when she points out Aaron’s hypocrisy defending a black man instead of a black woman. “Do you know how many Black women were beaten, shot, arrested the same week as Andy Josiah? Why don't you take one of their cases?” she asks. “There was a Black woman who was killed in her own home by cops. I don't see the outrage for her. Where's her burning buildings?” If the case she is referring to is Breonna Taylor, I can assure the series there were plenty of burning buildings for her.

Finally, Aaron delivers a closing statement alluding to what else but “the talk” that apparently only Black kids get about how to act around police officers (plenty of white kids are taught to behave, too). And, of course, claiming that the officer was racist:

When they get to around 10 years old, every Black child in America gets "The talk." What to do when accosted by a police officer. Hands out your pockets. Yes, sir, yes, ma'am. Respect, compliance. From about that age, we are taught that this -- this color... this skin... will be considered a threat. Andy did what his father taught him. He was polite, respectful, compliant. Officer Matranga told us that. Now, if it wasn't true, why would Lieutenant Diaz go to such lengths to ensure the video disappeared? What we'll never know is what was going through the mind of Edgar Lindsley when he shot Andy Josiah. We can't know because he never bothered to fill out a police report. Why? Well, the assumption seems to be that Andy Josiah's family didn't deserve an explanation. And that by simply saying nothing, he would get the benefit of the doubt. Now, would he have felt that way if the man he pulled over was white? If it was a white boy who was calling out to his father from the back seat? If a white man made the "Mistake" of reaching into the car to help his frightened 7-year-old son, would Officer Lindsley have shot him in the back? Andy would have given his son that talk sooner or later. But Marcel doesn't need that explained to him now, does he? This all needs to change. It needs to change right now. Right here. Today.

The officer is found guilty of Criminally Negligent Homicide which Aaron calls “a slap on the wrist,” but his team considers it a step in the right direction. Sadly, this direction seems to include lying about real-life police shootings and demonizing anyone who disagrees. There’s no word whether or not For Life has been renewed, but I highly doubt it would pick season three as a time to be honest.

Conservatives Fight Back: This show was sponsored by commercials from Downy, Geico, and McDonald's.