Donald Trump Among Evil Cabal of Businessmen in Hulu’s ‘Monsterland’ 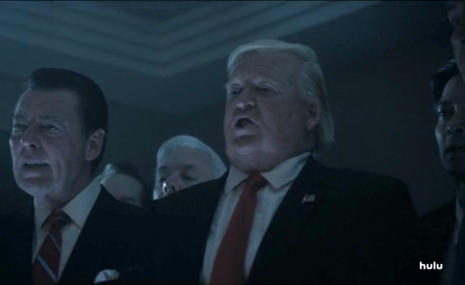 Hulu’s Monsterland is a bizarre show, and it's not just because Halloween is coming soon. It’s a depressing, hateful anthology series that seems to think humans are worse than any fictional monster. In this case, a wealthy CEO can be the literal vessel for an evil demon. Oh, and somehow Donald Trump is involved.

The series, which debuted on October 2, follows different characters across America who each have an unusual experience with the supernatural. It’s the standard fanfare for the anthology genre and, just as many before, it manages to squeeze in more than its fair share of liberal propaganda. From what the people behind the scenes indicate, it’s clearly on purpose.

In an interview with Syfy, showrunner Mary Laws described that her goals were to tell the “unlikely stories of those who rarely get featured in the horror genre: the poor, immigrants, and the ethnically diverse.” She also added that it was a mandate in the writers’ room to feel “really urgent and really present” regarding today’s issues. Despite the fact that the series is an adaptation of Nathan Ballingrud’s short story collection North American Lake Monsters, it still takes liberties by shoving in politics.

The worst example comes from the fourth episode “New York, New York” which focuses on CEO Stanley Price (Bill Camp). He comes under fire when his oil company is accused of polluting the environment. By television law, he’s obviously revealed to have been a greedy businessman sacrificing the earth for the sake of profit like all one-percenters. However, the way of revealing this is so strange it could only be devised by crazed leftists.

Stan begins to hallucinate a literal divine intervention thanks to his possession by a demon. In his delusions, he sees a recreation of the Last Supper, Jesus dismembering his hand for him to eat, and finally, a chanting choir of businessmen, which includes a Donald Trump figure. The blasphemous scene is completed when his hallucination begins quoting Scripture for its own twisted purpose.

Stan: What are they doing here?

Sharon: They came to see the miracle.

Sharon: The birth of the second coming.

Stan: Why are they staring at me?

Sharon: Because you’re the vessel.

Stan: I don’t feel at all well. Please tell them to go.

Sharon: They’ll go soon, Pricey. Just relax. Don’t be afraid. For behold…Unto you this day in the City of David is born a savior…who is Christ, our Lord. And this shall be a sign unto you. You will hear of wars, and rumors of wars. Nation will rise against nation, and kingdom against kingdom. There will be famines and earthquakes. All these are the beginnings of birth pains.

The wealthy CEO is apparently so evil that he becomes a conduit for the ultimate evil Antichrist. It’s barely even subtle at this point.

Of course, there are other examples throughout the show. The first episode depicts a young woman attempting an abortion at home in “Port Fourchon, LA” because her grandmother, who is a “Jesus freak,” would never allow it, before stopping because of the pain. Episode six "Palacios, Texas" has a mermaid murder a man for humanity polluting the waters. The third episode "New Orleans, Louisiana" even has a plot revolved around a woman dealing with her husband being accused of sexual assault in his job since, as the episode notes, “the accusations are usually spot-on.” Well, they’re spot-on for everyone who isn’t Joe Biden, that is.

October 2020 is already plenty scary on its own. It’s safe to say we don’t need Hulu’s Monsterland.

This Hulu series was brought to you in part by Dell and Progressive. Fight back by letting these advertisers know what you think of them sponsoring such content.