The “satirical” millennial series Search Party has sadly not aged since its move to HBO Max. In fact, from the look of these episodes in the June 25 season, it’s only gotten worse. We’ve moved from obnoxious characters to obnoxious attitudes as the show takes conservatives and Christians down with them. 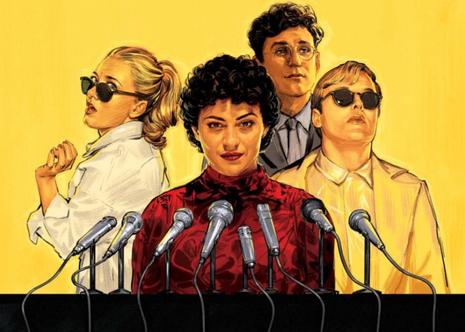 The third season revolves around main character Dory (Alia Shawkat) and her boyfriend Drew (John Reynolds) being tried for the murder of a private investigator from season one. The trial quickly makes the two local celebrities as media pundits and locals alike obsess over the case.

In the middle of this are Dory’s unbelievably shallow friends who attempt to carry on with their lives despite Dory’s trial. One of them includes her narcistic, gay friend Elliott (John Early), who hopes to plan his wedding. However, he can’t resist going on a conservative talk show to discuss the case with his friend and the host on Open Fire Charlie Reeny (Chloe Fineman), an obvious parody of Tipping Point’s Liz Wheeler. Being the blonde conservative stereotype, however, she’s shown to be a backstabbing, pompous populist, immediately referring to him as “everything that’s wrong with young liberals” to her audience. When he confronts her about it, she basically tells him that’s just “good TV.”

Elliott: I’m sorry. I just didn’t quite expect this from you. Not as a guest in your own house.

Man: And we’re back.

They continue to argue on the show, but there’s really no harm done by the end. The ratings are fantastic, and the two even get called back to produce their own show. It just goes to show that even among conservative women, no one under thirty-five in this series is a good person.

The show also has a low opinion of Christians as well. In the chaos of her friends being arrested, Portia (Meredith Hagner) finds solace in a local Christian group. Although the group is kind to her and defends her from press, she later drops them, saying the religious group is “lame” and they “just don’t get” her. They don’t prove her wrong, not taking part in her sex jokes and having an obviously closeted gay member. Heaven forbid Christianity doesn’t pander to the vapid twenty-something audience.

In the wide array of things HBO Max hasn’t banned yet, we can all do better than Search Party. Unfortunately, this series has garnered a fourth season, proving that anything is possible if a show is bad enough.