CBS All-Access has officially hit a low point in The Twilight Zone reboot. Yes, this is somehow worse than the racist cop narrative two episodes ago. The previously iconic sci-fi series has now been reduced to a forty-minute jab against Donald Trump. 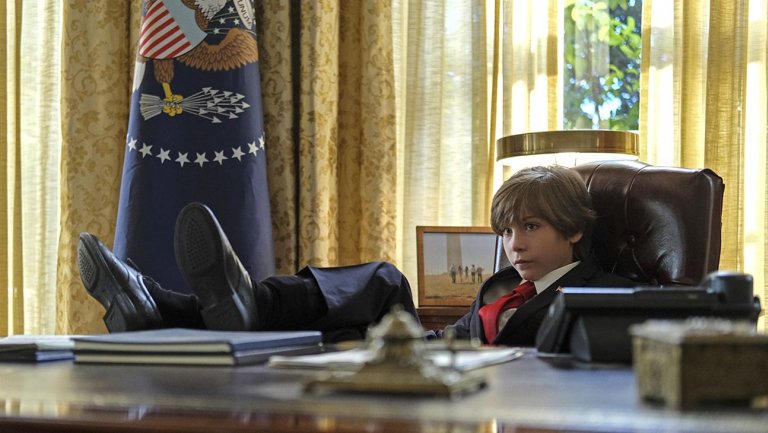 The April 25 episode “The Wunderkind” introduces us to Raff Hanks (John Cho), a disgraced campaign manager. After a devastating election, he attempts to clear his name with the most unusual candidate: 11-year-old YouTuber Oliver Foley (Jacob Trembley).

Through a loophole using Oliver’s mother’s name on the ballot, Raff is able to run a campaign using Oliver as the candidate. With Oliver's point-blank declaration of “I want people to be nice to each other” and Raff’s managing, he begins to win people over. Despite the glaring fact that he’s a minor, people begin to flock to Oliver for “starting something fresh” and bringing the values “back to what made this nation great.”

That’s about the time you realize that this indeed is satire based on Donald Trump. It’s so obvious that you would be hard-pressed to find a reviewer who doesn’t reference the comparison when discussing this episode.

However, the image only gets worse as the episode continues. Oliver is miraculously elected and quickly takes to his position as “Mr. President.” Of course, it doesn’t take too long to reveal his true colors as a paranoid spoiled brat. With unreasonable demands, and a penchant for firing people, he’s every bit the caricature that the media has created, down to the hand gestures.

Oliver: Can’t believe I get to live here now.

Oliver: Well, as leader of the free world, we need to fulfill my campaign promises. ASAP.

Oliver: First off, free video games for every American. Nintendo, Playstation, whatever they want.

Helen: Um, Oliver, I don’t think we can quite just do that.

Oliver: What are you talking about, Mom?

Helen: Well, I mean that there are laws. Congress. We talked about this, remember honey?

Oliver: But I promised everyone video games, and you, Mr. Chief of Staff, are going to make sure that happens.

Chief: Well, I’m not quite sure that Congress is gonna for that, Mr. President, especially given the way the national debt looks right now. And plus, companies aren’t just going to willingly give away their games.

Oliver: Guess they’ll just have to.

Oliver: But nothing. They have to. I made a promise. So they give away 270 million games to every American, or we put a surplus tax of a million dollars a Game Boy and put them out of business in a day. The people voted. We have to give ‘em what we promised.

Raff: You’re right. Mr. President, maybe we should, uh, hold off on the video game thing until you get settled in…

Oliver: I’m settled in, Raff, and I know what I want. And you guys are gonna get that done for me or I’ll get other people to get t done for me. There won’t be a shortage of people who want to work for the new President of the United States.

It’s at this point that Raff begins to have second thoughts on this presidency. Unfortunately, Oliver doesn’t take so kindly to the idea of “treason.” He goads the Secret Service into mortally shooting Raff, leaving him to bleed on an operating table as the public lambasts him for attacking the “sweet little boy.”

The Narrator, played by Jordan Peele, then comes out and gives his prophetic warning: “Razzle and dazzle people with the right lies, and eventually they’ll go blind to the madness right in front of their faces.” “The Wunderkind” is one of those episodes that really shows how dumb the writers think we are. They pawn the “Trump bad” plot as if it’s original and act like they’re profoundly speaking to the masses. All this proves is that this series understands politics and people even less than Oliver does.

The worst part of this whole thing is that it doesn’t even feel like The Twilight Zone anymore. There’s nothing supernatural or eerie about people calling the president a spoiled child. We see it every day on the news.